Terror in the Frameshop 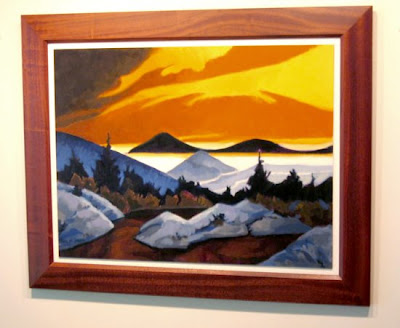 When I was finishing my Master of Fine Arts Program at Indiana University all graduating artists were required to have a Thesis Exhibition in the University's Fine Arts Gallery. It was funny that we were all scandalized by one of the painters actually putting frames on his paintings. This was back in 1972 and there was lots of talk in the air about seeing the painting as an object and that framing was somehow contrary to this. Of course the funny thing was that the framing artist sold most of the work out of his show. No one else sold a thing.

I started re-evaluating my position though when I started showing my work in galleries and found them coming back to my studio often having little dings and scratches along the carefully painted edges where the canvas wrapped around the stretcher bars. As a painter who prided himself on good craftsmanship, I realized I had overlooked the obvious role of the frame played in protecting the painting from collisions with the hard and abrasive world. I began visiting framing shops to look at their wares.

Anyone who steps inside such an establishment is at risk from drowning. They inevitably overwhelm you with hundreds and hundred of "L" shaped sample stacked in neat rows all on top of each other. The distraction level is completely over the top. If you somehow managed to make a selection of a frame, the first time you're told what the bill is going to be you're likely to have to be put on oxygen. It's important  for artists to frame their paintings if only to spare their collectors these anxieties.

Over the years I bravely experimented with different frame choices. There are two ways to go. One school of thought opts for the gold frame. It conveys a sense of riches and implies the painting is a precious object. As most of the designs of gold frames tend toward historical styles, they often also convey a connection to art history.  Many art dealers will tell you it is far easier for them to sell paintings in gold frames.

As a contemporary painter who started out as an abstract artist though, I've never felt comfortable with the antique gold frame look. Especially for realist paintings like mine, I want to differentiate my work from 19th century paintings. My art is about how it feels to be alive today, in the early 21st century. And the frame is part of that.

My choice for the last few years have been to go with custom made mahogany fames. I like the warmth of the wood, but want the attention to stay on the painting so I keep it simple. They are milled into a reverse wedge shape cross section so they taper gradually narrower as one moves toward the outside perimeter of the frame. I also have always gone nuts when even a small portion of the painting's surface is covered (even a 1/4"). It is a little irrational, I know. But to avoid that I use a 3/8" wide white colored reveal to separate the painting just a bit from the actual frame.