Showing posts from April, 2017
Show all

Mansard Roofs I Have Loved

Philip Koch, Mansard Roof, oil on canvas, 22 x 44 inches, 2017 Last Thursday evening I put the final touches on my latest painting (above). Then on Friday morning I viewed an Edward Hopper painting in the Philadelphia Museum of Art's American Watercolor in the Age of Homer and Sargent  exhibition that reminded me how Hopper's influence has often steered me in my choices of what to paint.  When I was a kid I'd see these mansard roofs in the old sections of downtown Rochester, NY and wondered about them- they seemed radically different than the California-modern house I was growing up in. To my young eyes they were unfathomably old and mysteriously exotic. But even then I had to admit they created a more striking silhouette against the sky than more ordinary buildings. My painting stemmed from some drawings I made on location in Buffalo, NY as part of my being Artist in Residence at Burchfield Penney Art Center (BPAC). Tullis Johnson, one of BPAC's Cu
Read more

The Vanishing Sand Dune- Edward Hopper and Me 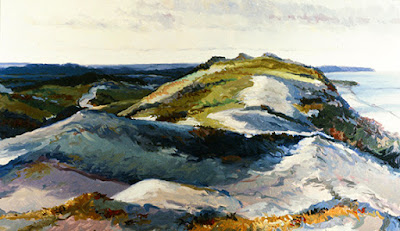 Philip Koch, From the Camel's Hump, oil on canvas, 42 x 72  inches, 1983, private collection I painted this large oil from a small plein air painting I made during my very first stay in Edward Hopper's former studio in S. Truro, MA.  The view is looking south at a panorama of Cape Cod Bay. The light is just after dawn. In the foreground is a strange feature- it's the hole in the ground where the distinctive dune pictured below once rose up. It was something of a landmark in Truro, known as the Camel's Hump. Edward Hopper, The Camel's Hump , oil on canvas, 1931 Munson Williams Proctor Arts Institute, Utica, NY That natural feature caught Hopper's eye during the second summer he and his wife Jo stayed on the Cape. He waited until the late afternoon's slanting light emphasized the dunes impressive volumes. To my eye it is one of his finest paintings and a keystone of the Permanent Collection of the Munson Williams Proctor Arts Institute
Read more

Saved from a Cloud of Stinging Beasts!

Philip Koch,  Dune at Paine Hollow, oil on panel, 13 x 26 inches, 1984 There is a very funny story associated with this oil. I was up on Cape Cod in June of 1984 painting in the Paine Hollow area of S. Wellfleet, working from a tidal inlet off of Cape Cod Bay. Things were going well for the first hour or so when the wind shifted and a cloud of tiny black flies descended on me. I toughed it out for another 10 minutes but the swarm overwhelmed me and I raced back to the car with my painting. When I got back to the rental cottage I looked in horror at the wet painting’s surface which was covered with the tiny bodies of the insects. I asked my daughters if they’d like the job of removing the bugs if I paid them a penny for each insect. They were young enough that to them this was serious money. Armed with palette knives they began meticulously picking off the critters. They were taking their task very seriously so I left them to it and took a shower to get the remaining bug
Read more
More posts