Hard Time in the Banishment Room 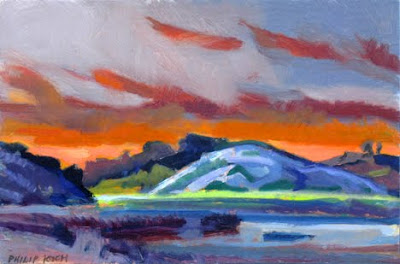 Philip Koch, Pamet River, oil on panel, 7 x 10 1/2", 2008
In the studio I believe in tough love. I have a special windowless room where paintings who have refused to come together to my satisfaction are sent. It's dark and cheerless, and no conjugal visits are allowed. My paintings, with a tremble in their voice, call it "the Banishment Room." Some never make it out alive.
This oil was begun years back in the early '90's on location on Cape Cod, looking just south of the mouth of the little Pamet River. Edward Hopper's studio is just a little bit over the dunes in the background. I did this during one of my  residencies in his studio. At the time I began the painting, I was "under the spell"  of Hopper's vision quite a bit. This meant interest in the details of human intervention in the landscape, so I included small beached sailboats that were in the foreground and a long spindly dock. My color choices were constrained to close approximations of what was observed, mostly beiges and grey blues.
Not completely satisfied with how it turned out I put it into the banishment room and moved on to other projects. With it out of sight, I forgot about the painting.
A few years passed and I found my imagination getting restless and decided to loosen its leash to see where it wandered. I had recently turned 50 and naturally was speculating on the themes of time, its passage and the changes that brings. Often I would start wondering how the landscape I was painting would look long in the future, or how it looked 40,000 years before. My eye was increasingly drawn toward the all-natural landscape that offered no clue as to "when" it was happening. Concurrent with this, I had begun experimenting with soft pastel chalks, a medium that forced me to use a different color palatte than what I was used to. The pastels were turning out with some more intense hues that I liked. In time, this new color sense seeped into my oils.
When I unearthed this oil panel from the my studio's banishment room, I saw immediately I wanted to go back into it to see where it could go. The boat and dock were replaced by tidal march grasses. And to allow the sky to change from a light sky-blue, I changed it to a sunset and pulled in a new flotilla of clouds to contrast the sand dunes.
My wife accuses me of being a pack rat. It's true. But I've had too many successes revisiting old paintings and making them better with some revisions. I believe the unconscious sometimes is working out better solutions for troubled passages in the paintings that initially are less than one's best. Not every painting, but enough that I've learned to be slow to discard anything. Fortunately, my studio has lots of storage.
Cape Cod Edward Hopper pastel technique