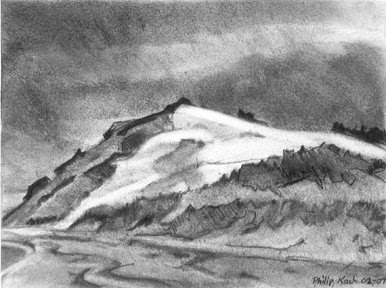 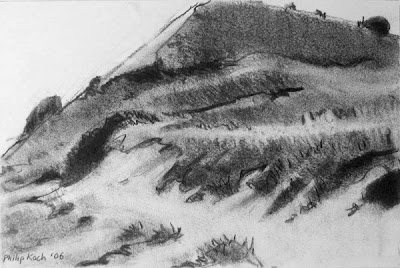 Philip Koch, Hopper's Beach, Looking North vine charcoal , 9 x 12", 2006
When I was 16, in my sophomore year,  I fell in love with a girl in my high school. I was sure I was going to marry her. When summer came my mother decided abruptly I should go on a tour of Europe my high school history teacher was organizing. The teacher's daughter came along and my girl friend, who couldn't afford to come on the trip, was intensely jealous. I assured her nothing would happen on the trip between me and the other girl. Nothing did happen, but it wasn't because the other girl wasn't interested or that I didn't find her attractive. She was lovely, but I white-knuckled it and stayed away from her for the whole tour. When I got back home, my jealous girlfriend, convinced hanky-panky must have gone on in her absence, dumped me. I was broken hearted.
This story is just where art is better than life. Let's jump forward four decades...
These two drawings were done on site down on the beach just below Edward Hopper's studio in S. Truro, MA. His wife's diary reports he used to go swimming right here by himself (pretty much the solitary way he did most things).
This top drawing focuses on the massive silhouette of the sand dune- it is the one one sees looking out of Hopper's 10' tall north facing studio window. But this is the view from down on the beach where it looks even more impressive. The light is just after sunrise.
The second drawing, Hopper's Beach, Looking North actually happened because I fell in love with the patterns in the dune grasses in the foreground as I worked on Hopper's Beach. But when I tried to include the grasses in a detailed way they interfered with the massive presence of the big dune. So I had to choose and I opted for the dune.
Unlike in real life, you can have your cake and eat it too. I then did a second drawing that could embrace the exquisite patterns where the foreground grasses met the white sand of the beach. It was a rhythm I knew was better than anything I could ever invent and it was mine for the asking.  What was needed was to make the second drawing be about the foreground and de-emphasize the dune in back.
I love both of these drawings, and I have it on the best authority neither is jealous of the other.
drawing Edward Hopper