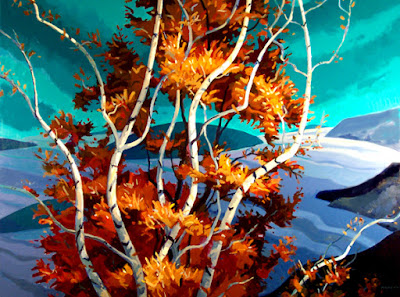 Philip Koch, The Arrival,  oil on panel, 45 x 60 inches, 2008
The other day I was over at my daughter Susan's new house. For the first time I had a chance to see the painting I had given her and Mike as a wedding present hung in its new spot in the daylight. Was happy to see it under natural light and that it is in a position where it's well lit without glare (I use a gloss varnish on my oils so that is sometimes an issue). Anyway, it seems the painting likes its new home.
A memory of driving on the Park Loop Road in Acadia National Park- strong winds were sweeping over the islands in Frenchman’s Bay stirring up dark and light patterns on the water’s surface. The picture stuck in my mind to the point I had to make a painting about how it made me feel.
Working entirely out of my head the forms are all invented.  Everything went through many changes before I get the feeling of driving movement that I needed to be the heart of the picture. It suggested to me the winds were bringin…
Post a Comment
Read more
More posts