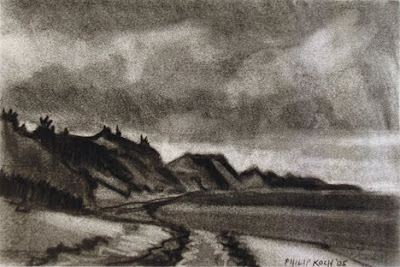 Philip Koch, Truro Beach, vine charcoal, 8x 12"
One time while walking along the beach outside Edward Hopper's studio we decided to hike a distance to the south along the Bay. We spied what we thought was a log in the distance but as we approached we were astonished to see it was a seal. It was dead, but very recently so and it was in absolutely perfect condition. It took an effort not to think it was merely asleep. I'd never seen such a beautiful animal such as this up close before. It particular, though it was large, it felt curiously feminine. Perhaps it was the delicate and surprisingly long eye lashes.
It was sad to see the life of such beauty cut short and a solemn mood stole over us. Surely the seal hadn't planned for her (?) days to end just when they did.
I came back the next day as I wanted to do a drawing of the spot and, silly as it sounds, dedicate the drawing to that seal. This is the resulting vine charcoal. As I neared completion of the piece, the clouds closed in fast and it began to rain lightly. I beat a retreat back to the Hopper studio and finished the drawing there. Landscape painters have to be ready to work around sudden rainstorms. They happen, but they don't have to stop us dead in our tracks.
Right now I have a major plumbing emergency- it's raining in my basement and I have to close to attend to that. But we'll get through this. After all, I'm an old hand at rainstorms.
Cape Cod drawing Edward Hopper