Showing posts from April, 2011
Show all

Intimate Interiors: What we learn from Vuillard 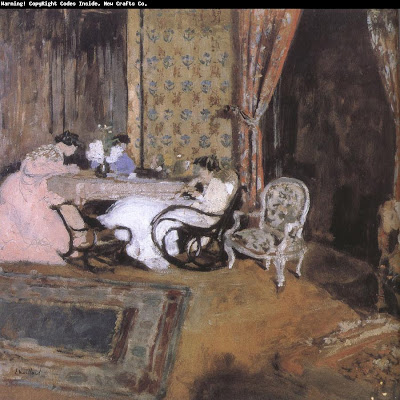 On Friday I was speaking with a student in my Painting class at MICA and told her I saw similarities  in her work to that of Vuillard's. She hadn't heard of Vuillard, nor had two other students I'd mentioned his work to in the previous week. So I thought it would be fun to summon up some of the old guy's paintings. They're really lovely sometimes. Edouard Vuillard was a French painter (1868-1940) who inhabited those fertile waters in that country between the advent of impressionism in mid century and the plunge into full blown abstraction of the early days of the 20th century. Vuillard did lots of different kinds of work, going from these adventurous pattern oriented oils to timid commercial portraiture that almost nobody looks at these days (he had to pay the rent too). But at his best, like the ones I've chosen here, he's a delight.  In the above painting, two bentwood rocking chairs are placed facing each. Vuillard loved their pretzel-like curves. So t
Read more

Victory in the Studio

Philip Koch,  From Day to Night,  oil on canvas, 36 x 72", 2011 Here's a new painting completed yesterday. It will make its public debut this July when the Peninsula Fine Arts Center in Newport News, Virginia open its Unbroken Thread: The Art of Philip Koch (July 23 - October 2). The exhibition was organized by the art historian Eva J. Allen, Ph.D. for the University of Maryland University College (UMUC) and is on an eight museum national tour. It's got a long, long history. Begun in 2003 I actually included it in my first solo exhibition at the Cape Cod Museum of Art that year and the following year at UMUC's  A Vision of Nature: The Art of Philip Koch. It was reproduced in the catalogue UMUC published for that show.  Then it came back to my studio and I got an itchy feeling I could make it better but wan't quite sure what I wanted to do with it. So I assigned the status of an NFL player on injured reserve.  We eyed each other on and off as I worked on other
Read more 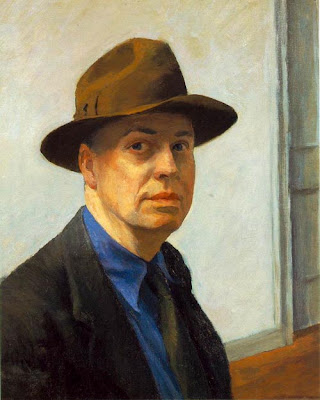 Last week I got a thoughtful response to my post on Edward Hopper.It included some intriguing questions. One of them follows- One question I do have though it how much you think his style of handling of the paint was intentional. Hopper was such an incredible editor and something as fundamental as "his style" must have been one of the most intentional decisions he made.   No one can crawl inside Hopper's head, so right off the bat my opinions are just educated (I think) conjecture. But here goes. I believe there is more to all of us than meets the eye. That there are depths to our emotions and understanding that lie just beyond the grasp of what we normally can know. People look to art because on some level they just sense it's going to show them something they can't learn any other way.  When I was a kid I saw jugglers when my folks took me to the circus. Impressed, I hurried home to grab some balls to start practicing this amazing skill. I tried juggling fi
Read more 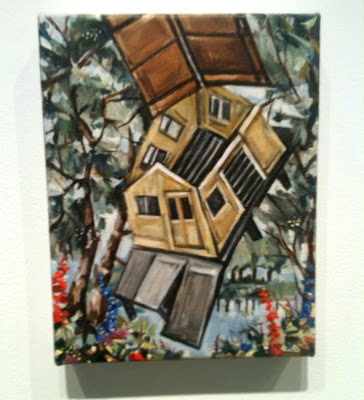 I received an intriguing comment on my last blog post, Edward Hopper's Women, from a reader wondering how much Hopper chose his style of painting? Mulling over how to answer I found myself thinking about Emily Campbell, the graduate student at the Maryland Institute College of Art who's been helping me teach my Life Drawing and Painting 1 classes. Above and below are some of the pieces Emily unveiled in her MFA Thesis show last Friday. In the oil above a little house seems to fall to pieces as it flies up over a forest. It's the sort of image one could easily encounter in a dream. How Emily came up with it I'm not sure, but I know she has a collection of little dolls and toys that likely set her mind to weaving this tale for us. I like the painting quite a bit, largely for her unexpected and quirky details in the background. The foliage isn't naturalistic, rather it's giving us a particular gestural rhythm not unlike the patterns you'd see in a child's
Read more 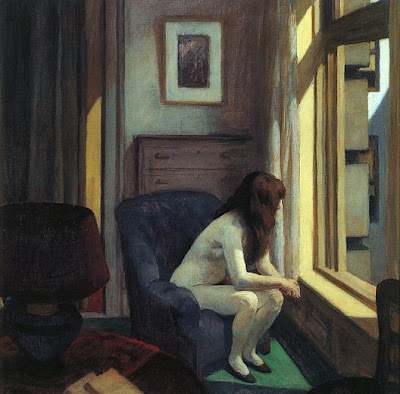 I always come back to Edward Hopper.  Sometimes I go for months without looking at his work, almost like taking an extended vacation from him, but then something calls me back. After an interval like that I check out a couple of his paintings and I'm always glad I did. Hopper's sort of an extra father for me- he bore more than a passing physical resemblance to my actual dad who died when I was young. I think unconsciously when I was just beginning as an art student that drew me to him.  But what really pulled me in of course was his painting itself. I had been doing colorful acrylic abstractions when I began painting my freshman year in college. One day sitting in the art library at Oberlin College with a book on Hopper open on my lap it just hit me- I wanted to drop what I was doing, teach myself how to draw (at that time I couldn't) and try to paint like Hopper. It really was that simple. Here are two favorite Hopper's. Above is a wonderfully gentle and contemplat
Read more 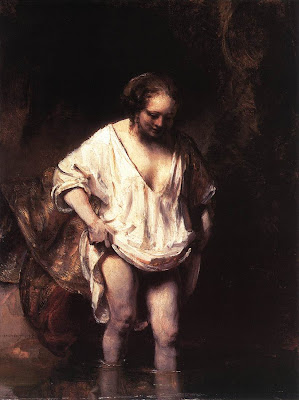 Only the time (and energy) for a short post today as I'm dealing with some sad personal business this week. Hopefully I'll be back to a more regular blogging schedule in a few days.  Above is a very tender painting of one of Rembrandt's wives bathing. I always wondered if she was doing this at midnight or in a cave it's so dark. Yet that darkness is a foil for the brilliant light on the woman's torso. We sense this woman has a depth and personality to her in part because she generates a variety of shapes for our eye. Look at the rounded edge of her updrawn bottom hem compared to the almost straight lines of the "v" shaped neckline. One of the big challenges an artist faces is getting a variety of lines into the painting, and then getting them to look like they're in conversation with each other. Rembrandt does this swimmingly here. This painting of a stone bridge deftlly knits together the heavens and earth. Notice how the painting has a series of
Read more 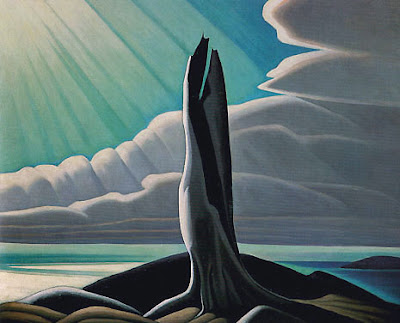 oil by Lawren Harris A beautiful painting cannot banish sadness, but it is a light to put next to one's sorrow.
Read more
More posts