Showing posts from September, 2013
Show all

Hopper Drawing Exhibition at the Whitney Museum of American Art 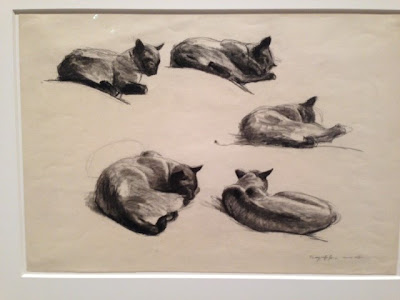 Perkins Youngboy Dos Passos, 1941,  fabricated chalk on paper, 15 x 22", Josephine Hopper Bequest Had the great pleasure of viewing the pivotal Hopper Drawing exhibition at the Whitney Museum in New York last Friday. Organized from the Whitney's vast holdings of Edward Hopper's work on paper by Carter Foster, the museum's Curator of Drawing, it is nothing less than a godsend to anyone who loves Hopper. The show continues through Oct. 6, 2013 and is well worth the trip. If you can't get there in time, the exhibtion catalogue (which includes a long quote from me in it's notes for Chapter One) is excellent with extremely well done illustrations.  Hopper was unusual among 20th century American artists for his habit of doing numerous drawings in preparation for most of his major oil paintings. Foster has paired a number of major Hopper oils with some of the drawing studies that led up to them. But since Hopper was a man who knew how to enjoy his ey
Read more 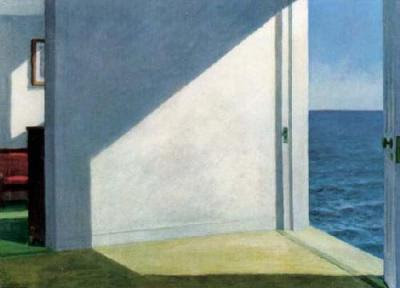 Edward Hopper, Rooms by the Sea , oil on canvas, Yale University Art Gallery.  I came across an image of this painting on Yale Art Gallery's Facebook page this morning. When I was a kid growing up on Lake Ontario one of our favorite games when the Lake was really rough was to paddle out in canoes and try to "surf" the biggest waves. For a few exhilarating moments they would push us in a rush toward the shore. The feeling of being swept along by just the water's energy was intoxicating. That these trips usually ended with us capsizing and banging our knees on the rocky shore did little to dissuade us. We knew our fun. Some think of paintings as static things, but anyone who spends more than a moment standing before a painting finds their eyes start moving around the piece. Even its relatively empty areas have a strange power to make your eyes want to sweep across its surface.  I've written before about this pivotal oil  Rooms by the Sea  by Hopper- how
Read more 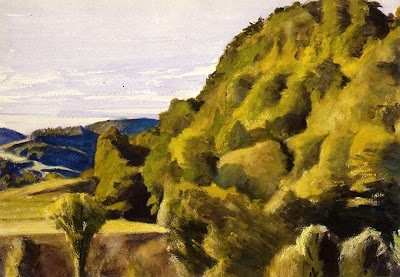 Edward Hopper, Bob Slater’s Hill, 1938, watercolor on paper, 13 1/4 x 19 1/2 inches. Huntington Museum of Art, Huntington, West Virginia.  Great paintings aren't shy. They tell us where to look and how things feel. They may employ a delicate touch, but underneath it all there's no question who's in charge.  Was just looking at this watercolor by Edward Hopper, a Vermont scene. In it Hopper shows his hand as someone who combined both sensitive looking and  decisiveness.  It's a painting done largely from direct observation. A remarkably steep hillside catches the late afternoon sun (I'm guessing it's late afternoon by the golden color of the sunlight). Hopper loved the feeling of the wooded hillside and invested it with a unique personality. And he wanted to be sure we noticed it. So he made several adjustments. Late afternoon is a time of day when every tree and bush starts getting an intensely dark shadow on one side. As Hopper worked each individua
Read more 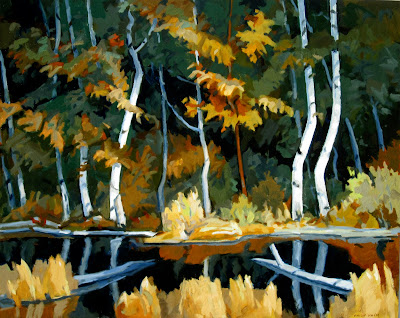 William Baczek Fine Arts in Northampton, Massachusetts opens their Annual Landscape Exhibition tomorrow that includes four of my large oil paintings. I'm delighted with the selection of works William Baczek made for the show.  Above is my  Deep Forest Pool , oil on panel, 32 x 40". It's a painting done entirely from my imagination.  Like most of my work it draws part of its inspiration from my youth. I spent hours tramping around with my friends in the heavily forested hills surronding my home along the south shore of Lake Ontario outside Rochester, NY. I remember in particular the striking whites of the birch trees and the swampy still ponds that lay in many of the valleys. To a kid it was the perfect invitation to come home with muddy wet shoes. In this painting one of my challenges was to pull out just a few from the multitude of trees to play a starring role. In turn most of my highlights have had their intensity softly turned down to let the remai
Read more 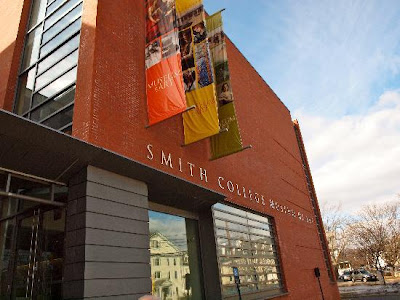 Last week I was in Northampton, MassachusetAts delivering paintings to William Baczek Fine Arts for the gallery's  Annual Landscape Exhibition  that runs September 4 - October 5. William Baczek suggested I take the opportunity to revisit Smith College  Museum of Art, something I needed no urging to do as I remember from previous visits it's got a powerful Collection. Here is a painting I studied incredibly closely some years ago when I  first cut my teeth as a landscape painter in the early 1970's.  It is Jacob van Ruisdael's oil  A Panoramic View of the Church of  Beverwijk.  Painted 1660-1665. Ruisdael was one of the very first painters to take the space of the sky seriously as a vehicle for emotion.   Instead of merely a backdrop to the action on the land, the planes of the clouds and the way they overlap each other lend a full blown personality to the top 2/3 of the painting. As a young artist I made a careful copy of it in oil. Two oth
Read more
More posts