Showing posts from October, 2010
Show all

The Kent Collector Journal & How to Draw 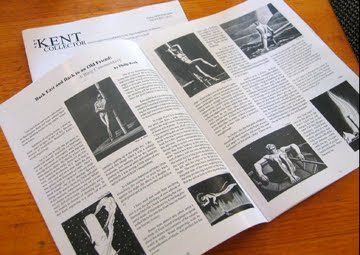 Marguerite Eisinger, the Editor of The Kent Collector journal kindly published my article in her new Fall/Winter 2010 issue. It's based on two posts I wrote on this blog last January as an appreciation of some of my favorite wood engravings by the 20th century American artist Rockwell Kent. If I was really organized I'd now have a spiffy link you could click that would bring up those two posts so the curious could read them. But I just raked up two tons of leaves out of my backyard and will make you go search for them yourself. The journal is published by one of the coolest regional museums, the Plattsburgh State Art Museum in northernmost New York State. Kent lived at the end of his colorful life in the Adirondack Mountains near there and gave a large amount of work and personal effects to the Museum, making it really the Rockwell Kent Museum. Here's a link to The Kent Collector website- I urge people to subscribe. Kent has been a wonderful teacher to me. He firs
Read more 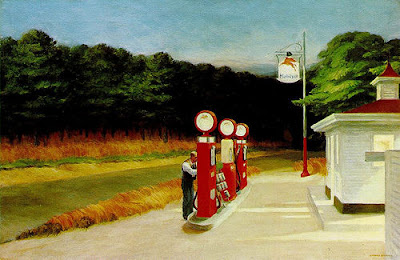 Edward Hopper, Gas, oil on canvas This is another iconic Edward Hopper painting. It evokes the end of day like no other painting. For good reason it's known worldwide. It's based on two gas stations that stood until recently on Route 6, the main road that runs up the spine of Cape Cod. Hopper used to fill up his old Buick sedan at both of them. Tellingly, the building in painting was based as much on Hopper's invention as on the actual architecture of the old gas stations. The darkening dense woods on either side of the road captures the feeling of Cape Cod's forest perfectly. What's so interesting is how Hopper created such a universal image of the passage of time using the details of a very real piece of landscape, Cape Cod. Below is the Truro, Massachusetts studio where Hopper painted so many of his most famous paintings. It is remarkable for its simple understated qualities- so much like Hopper's paintings themselves. Below are the steps leading up
Read more 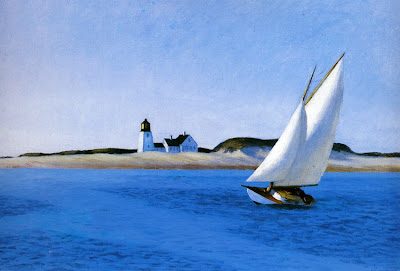 Here's a quintessential Edward Hopper oil of Cape Cod, The Long Leg. It's a combination of influences. There is some of the lighthouse at the extreme tip of Cape Cod in Provincetown (the next town over from Truro, where Hopper had his studio). And there's a lot taken from Hopper's walking his beach along Cape Cod Bay and studying the structure of the sand dunes, tides, and the Cape light. Hopper loved the poetry of Cape Cod as a source for his paintings. It's remarkable how different his Cape Cod looks than anyone else's. One thing he loved was the white sand that's everwhere on the Cape. In his hands it was by turns yellow, pink, pearl, subtle blue or delicately violet. Yet he always held the reins back on its colors, never lapsing into cheesiness or overstatement. I think it was because he took the Cape seriously. He realized it could stand on its own as one of the most dramatic pieces of landscape in the country without any overstated theatrical color
Read more

Painting in the Washington County Museum of Fine Arts 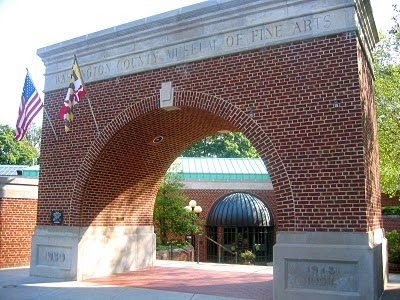 Last week Amy Hunt who runs the Education program at the Washington County Museum of Fine Arts in Hagerstown, Maryland invited me to set up my easels and work in the Museum's galleries for a day. This was to be part of Hagerstown's Artwalk , a coordinated day of artists, musicians and poets performing throughout the city. My first response was hesitant. I've never done a painting demonstration where a group watches as I create a painting and talk about what I'm doing as I work. Honestly I find painting hard enough to do well as it is without worrying about being entertaining or educational as I do it. But as I thought more about it, I reconsidered. This was an opportunity to use the Museum and its unique ambiance as a studio for a day. Now there are times in the creative process that are especially critical- the times when you're just beginning to inch your way forward in unfamiliar territory. It can be a little like walking on egg shells. Sometimes you need com
Read more 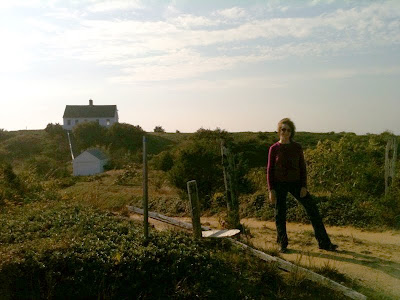 My wife Alice standing at the top of Edward Hopper's driveway, S. Truro, MA, September 2010. Do you notice anything missing from this scene? A funny story about Edward Hopper, which in itself is funny as he was hardly known as an exemplar of humor. Way back in 1983 my wife Alice and I stayed in the Hopper studio for the first time. As Hopper has been almost a guiding star to me as a young artist, I was over-the-top excited. Back then the trees hadn't re-grown so high from the 19th century deforestation of Cape Cod, and one could view the Hopper studio from quite a distance. I found a particularly good view of it standing on a sand bank along the dirt road and started a panoramic oil of the studio sitting on the dunes. The painting was going really well when an older woman came out of a nearby house and angrily yelled at me for standing on the sand bank's plants. She had a point. I'm usually really careful about trampling the local flora. But I was determined to st
Read more 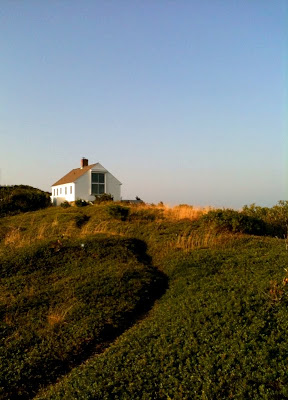 Here's a photo of Edward Hopper's Truro, MA studio I took during my 13th residency there in September. We're looking south at the studio and the sun has just come up over the horizon. To our right, though it's hidden by the crest of the sand dune, is a wide open view of Cape Cod Bay. As you can see, Hopper had a completely unobstructed view of the light from dawn to dusk. That's fitting for an artist whose hallmark was painting clear, strong sunlight in most of his paintings. He did it very well, and much of that came from his long and hard (but also loving) observation of the Cape Cod light. Hopper no doubt learned about seeing light from his teachers such as Robert Henri, a painter who clearly loved sharp direct lighting. You can see a heightened awareness of strong directional lighting in Hopper or in the work of his classmate and fellow Henri student, Rockwell Kent. My own sensitivity to light owes much to the study of Hopper's achievements. Below is a ph
Read more

Surprised on the Cape 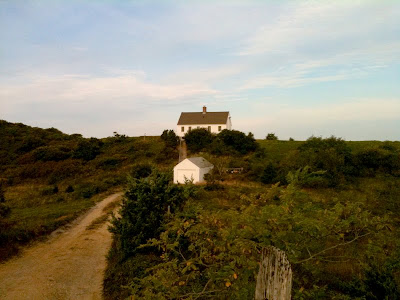 Last week I was up staying in Edward Hopper's painting studio on Cape Cod. Above is a photo of the studio up on the top of what's actually a quite tall sand dune with its garage just below. Behind the studio is the unseen expanse of Cape Cod Bay. This is the view from the "main" road, a very bumpy and pot-holed sandy thing that only adds to the mystique of the place. My residencies in the studio are usually peak painting times for me, and this week was no disappointment. But as so often happens with art making, what I intended to do and what actually came out of the kitchen were entirely different. Several years ago I did a long series of paintings and pastels of the studio's interior. Here's one of my favorites: Philip Koch, Truro Studio Bedroom pastel, 14 x 7" I hadn't done any more studio interior pieces the last few times we were at the Hopper studio and I was itching to try some more. So the first day there I set up my easel in the painti
Read more
More posts