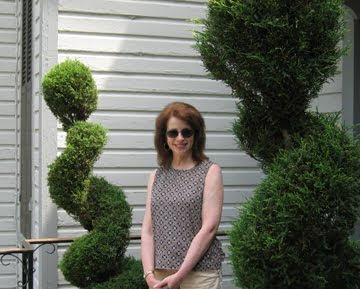 Went to the Eastern Shore of Maryland Tuesday and Wednesday for some plein air work. First stop though was Easton to visit one of my old favorite art museums, the Academy Art Museum. Years ago it was a much more humble institution simply called the Easton Academy of Art- basically a community arts center with a small Permanent Collection. I taught a couple of landscape painting workshops there in the '70's and '80's.
Boy has the placed grown. Above is a picture of my lovely wife Alice making acquaintance with the topiary that flank the Museum's front entrance. A long-overdue restoration and serous expansion of their gallery spaces transformed the place. Their Director, Chris Brownawell obviously worked long hours building support for the Academy and seriously upping the quality of its programs. Very gratifying to see. Still the place still has its original modesty and charm. If you haven't seen it, I highly recommend it. Had a chance to meet and talk with Chris Tuesday afternoon. Nice fellow. 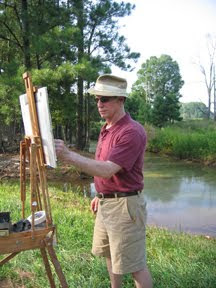 But then off to work. Headed to the Blackwater Wildlife Refuge south of Cambridge, MD.
Vine charcoal has been increasingly my medium of choice for working on location. The key reason is I want to take home extremely careful observations of the shapes and tonal relationships in my motifs. But color choices in the last dozen years have been most satisfying when I create them after the fact back in the studio. This is only possible because I had 30 years of painting outdoors where I pretty much devoted myself to working with the actual hues one sees on location. You internalize a great deal of what reality looks like.
Vine charcoal also has another advantage- it let's you work quickly as there is no color mixing involved. This sometimes, like this weekend,  can be a lifesaver. Understand I'm a little swimmy-headed right now as we've just returned, but it was hot. Very hot. The Blackwater National Wildlife Refuge was beautiful, but it was a malarial swamp yesterday and today. I think also I discovered that crocodiles live much farther north than previously thought (I heard something thrashing in the water behind me as I worked). What is more, they likely have a previously undiscovered larval form where they fly and bite the unsuspecting passing mammals to eat their flesh and drink their blood. Certainly these weren't mere mosquitos and deer flies. 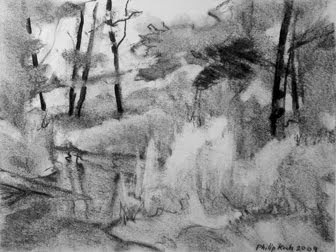 Philip Koch, Blackwater Refuge, vine charcoal,
9 x 12", 2009
I also did a drawing over in the tiny town of Oxford, MD of trees on the Tread Avon River. 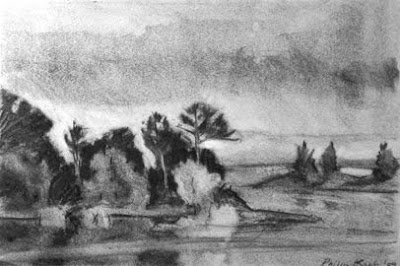 Philip Koch, Eastern Shore, vine charcoal, 8 x 12", 2009
Now likely is that some elements from each of these drawing will tip toe their way into some of the paintings I'm currently working on.