Showing posts from December, 2016
Show all

A Long Time Coming...Painting a New Oil for my Swope Art Museum Show 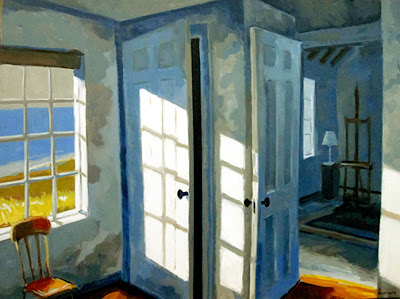 Philip Koch, Truro Studio: Two Rooms, oil on canvas, 36 x 48" 2016 My brush strokes are always in a hurry. When I paint my hand is doing more slashing and scrubbing than smoothing things down and polishing surfaces. One might get the idea my paintings happen  quickly. Ironically they don't. Rather I take months to sort through the colors to get them just the way I want them. Sometimes I need to build up my knowledge of a source for years before attempting a major painting. Above is one of my new oils. It shows Hopper's bedroom in the studio he designed and had built for himself in Truro, MA in 1934. At the left is one of the windows overlooking Cape Cod Bay, and through the door at the right stands his easel where he painted dozens of his world famous masterpieces.  My painting will make its debut Feb. 3, 2017 in Terre Haute, Indiana at Swope Art Museum' s exhibition Light and Shadow: Paintings and Drawings by Philip Koch from the Edward Hopper Stud
Post a Comment
Read more
More posts