Seen Clearly Only in the Fog

- August 01, 2009
Sometimes we can pick out the significant pattern in the clutter of events. Other times we're not so lucky.
One of my favorite places to paint is Cape Cod, and Truro out near the way end is particularly rich in possibilities. Partly it is the Edward Hopper art history there. Running right through the middle is the Pamet River, itself one of Hopper's favorite motifs. Except for Truro Harbor itself, I had had little luck finding other places along the river to paint. Usually the problem was the spaces were too crowded, with foreground, middle ground and background all clamoring for my eye's attention.
A few years ago I was staying in the Hopper studio and woke up early to paint only to find everything covered by dense fog. Nonetheless I packed up my charcoals and headed out. Once at the river I was delighted- the fog had pared down the selection by totally obscuring the far shores of the river. It just wasn't there. Here's the resulting drawing. 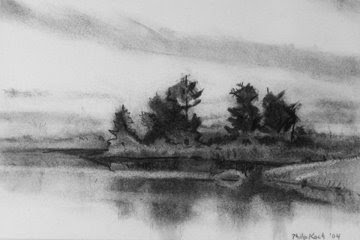 And here is the oil on panel, October,  28 x 42" that I painted in the studio based on that vine charcoal as well as a vivid memory of how it felt to stand and work shrouded by that fog.
Some things stayed faithful to the drawing and much else transformed into something else. 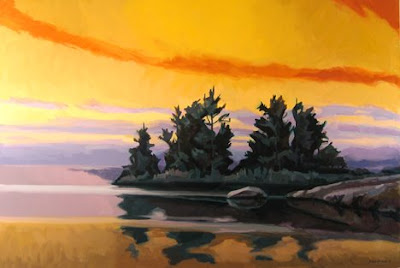 For the last dozen years I've been doing most of my work indirectly like this, using the drawings to simplify the choices for me and inventing the color harmonies back in the studio.
For nearly 30 years before this though I had done almost all my work in the plein air fashion with the major decisions happening out in the field. There is real honor in both modes of working. It is just that now for me landscape painting is above all about capturing a state of mind rather than a literal place.
drawing Edward Hopper