Showing posts from May, 2016
Show all

A Portfolio of My Chestnut Ridge Park Drawings 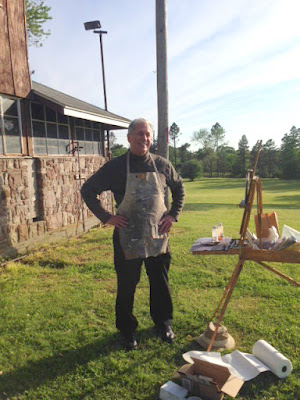 Philip Koch painting and drawing at Chestnut  Ridge Park, May 2015 In May of 2015 I took my first official trip to Buffalo, NY as Burchfield Penney Art Center 's Artist in Residence. I asked Scott Propeak and Tullis Johnson, two of BPAC's Curators, where I might go to get some panoramic views of the area. They both suggested Chestnut Ridge Park, an area south of Buffalo that had been a favorite of Charles Burchfield's when he worked on his landscapes. Their suggestion was right on target. I began at the crest of the hill in the Park that commands a view looking north toward a distant Lake Erie. A whole series of drawings ensued. Though I had grown up in nearby Rochester I had never done serious art in Western New York State before. These repeated views from Chestnut Ridge reflect my delight in finally working from the landscape where I grew up. I just wanted to keep doing drawing after drawing. Philip Koch, Chestnut Ridge: Lake Erie , vine charc
Read more 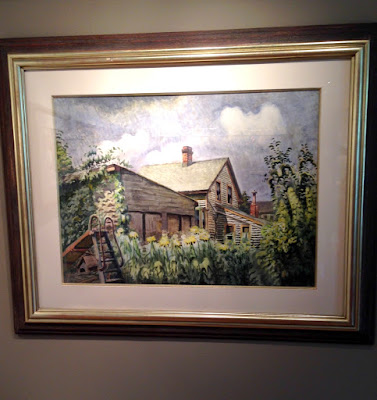 Charles Burchfield's watercolor August Morn hanging on the Sommerville Manning Gallery wall yesterday. One of the ways you know a painting is good is that instead of tiring of it you grow more curious about it over time. Yesterday we drove up from Baltimore to Greenville, Delaware and visited Sommerville Manning Gallery. Each year they mount an exhibit that's especially worth seeing,  American and European Masters   . One of pieces they included is the Charles Burchfield watercolor August Morn, 1933-49. By coincidence before I learned the painting was going to be on display at one of my art galleries  I had written a blog post about the painting . The temptation to see it again in the flesh was too strong to resist. Rebecca Moore from the Gallery and I enjoyed closely going over the painting together. S ince becoming the Artist in Residence at the Burchfield Penney Art Center in Buffalo, NY I've had the opportunity to examine Burchfield's paintings and
Read more 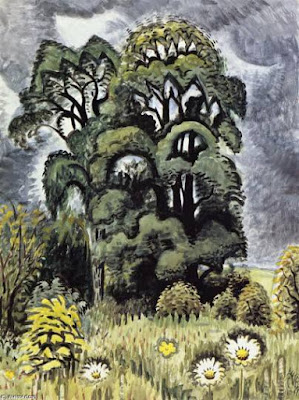 Burchfield Penney Art Center posted this Charles Burchfield watercolor today on their Facebook page. It's Hush Before the Storm  from 1947 that's now in the Wichita Art Museum . What with the cheerful blossoms in the immediate foreground one might at first be tempted to see it as just a pretty picture and move on. But we're talking Burchfield and with him there's usually more going on. I think one of the best pieces of advice I could give someone who wants to experience a painting more deeply would be for them to spend more time enjoying the painting's background. What caught my eye in this Burchfield was the sky. The crazily active shapes in the trees could have monopolized the painting.  It would have made his idea too simple and we would grasp the composition too quickly. But the artist cleverly invents countering shapes in the sky that answer back to the noisy arches and angles in the trees.  Very often I think master painters reveal themselv
Read more

Tapping Into the Past 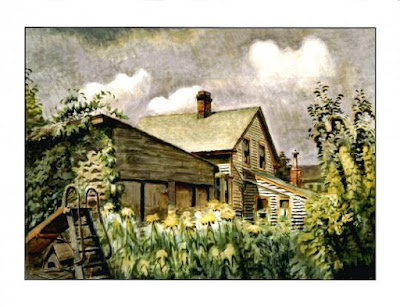 Burchfield Penney Art Center is great about posting a different Charles Burchfield painting on their Facebook page every morning. A recent one is this lush watercolor,  August Morn, 1933-49, a view Burchfield painted from his backyard in Gardenville,NY of the backyard of the Arbarella house next door. I love the painting for the way packs in an incredible amount of information and detail. In less able hands it would have been an overcrowded jumble. Yet Burchfield evokes a feeling of an intimate and even cozy space. He organizes it beautifully, with a big role assigned to the prominent and impenetrable row of sunflowers that wall us off from the neighbor's yard. One of Burchfield's great talents was finding extraordinary possibilites in the close at hand.   It's always a mystery how some artists manage to orchestrate their forms and their emotions together in a powerful visual duet. I think one reason Burchfield's creativity functioned on such a high level is
Read more 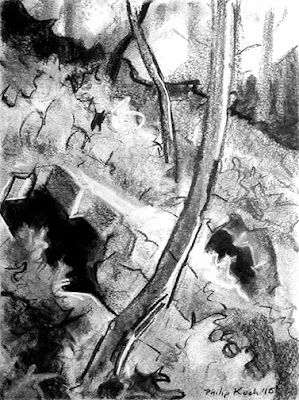 Philip  Koch, Coke Ovens Leetonia, Ohio,   vine eharcoal, 12 x 9", 2016 This morning I was reading the notice for the upcoming exhibition at Burchfield Penney Art Center, Blistering Vision: Charles E. Burchfield's Sublime American Landscape   (on display July 8 through October 23, 2016 in Buffalo, NY).  Last summer I had begun a drawing that relates to BPAC's  exhibition but never completed it to my satisfaction.  One of the themes of the show will be to demonstrate how Burchfield blended the tradition of romantic 19th century American nature painting with his own awareness of the growing threat posed by industry. In Burchfield's work are some of the first stirrings of environmental consciousness in 20th century American painting.  Just a few miles east of where Burchfield grew up in Salem, Ohio is  Leetonia, home in his day to a major coal mine and a field of open air coke ovens. Beehive-shaped brick enclosures built into banks of earth, these oven
Read more
More posts