Showing posts from August, 2020
Show all

The Little Red House / Travel Back in Time 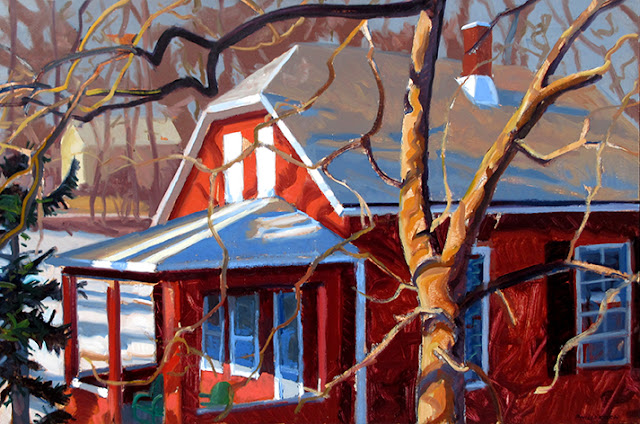 Philip Koch, Returning , oil on canvas, 28 x 42 inches, 2020   Don’t you find certain places find their way into your memory and remain a vivid picture there. Sometimes you can feel like you’ve slipped back in time and are there once again. This old farm house was near my studio in Baltimore. I wanted to paint it the moment I saw it, partly because of its cherry red exterior. But also because it felt instantly familiar. It strongly reminded me of the little forest house I used to stand in front of to wait for the school bus.  My town was rur al then. Some school years I’d wait with one or two other kids. Other years the bus would stop there just for me. The bus had a long route to cover and often would be 20 minutes or a half hour lafe. But this rarely bothered me as that house was a magical setting- once formal gardens that were now overgrown. It all was beautiful and just a bit haunted in the best way. I like to think memory like this guides my paintbrush.
Read more 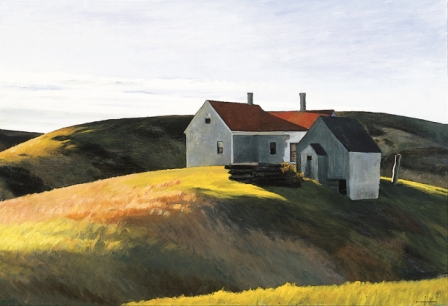 Edward Hopper, Mrs. Scott's House, oil on canvas, 34 1/4 x 50 1/8 inches, 1932, Maier  Museum of Art at Randolph College, Lynchburg, VA I don't usually start a painting with another artist's painting in mind. My new canvas below however owes a big debt to Hopper's oil Mrs. Scott's House  that's in the collection of the Maier Museum of Art at Randolph College in Lynchburg, VA. Edward Hopper and his wife Josephine first stayed on Cape Cod in the summer of 1930. For the next several summers they explored the land out near the very end of Cape Cod's peninsula.  Famously private, I suspect he liked how few people there were in the remote town of Truro.  One striking painting that resulted from this searching was Mrs. Scott's House  seen above.  Hopper was always drawn to paint big, solid volumes illuminated by brilliant sunlight. He must have loved the stark contrast of the massive and nearly bare dunes against the small but stubbornly upright house. As confl
Read more
More posts