How to get an Artist's License 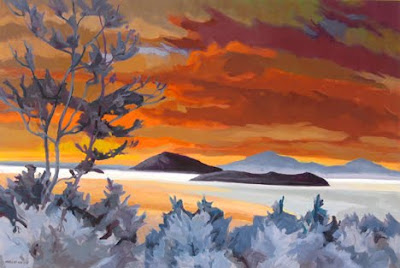 Philip Koch, West from Monhegan, oil on panel
28 x 42", 2009
Degas is reputed to have said that artists need to have the cunning of criminals. He probably said this to stimulate peoples' thinking. Artists are famous for saying slightly outlandish things for just that purpose. What he was getting at was that artists genuinely try to tell us the truth, but that they distinguish between big truths and small ones.
Back in June '06 I made my first painting trip out to Mohegan Island off the coast of Maine. Way back in 1969 I first learned  of Mohegan while reading Robert Henri's book The Art Spirit while I was studying at the Art Students League in New York city. The book quotes Henri advising a young artist to go to paint the wild elements on Monhegan, as he himself had done. His students including Rockwell Kent and Edward Hopper, and many others, took him up on it. So many fine painters ended up painting on the island that for me my trip there took on the aura of a pilgrimage. I wasn't disappointed.
The oil painting above was done back in my studio from an on site vine charcoal study. Here's a drawing I did standing within feet of the lighthouse atop  Monhegan's highest point. It is 9 x 12." 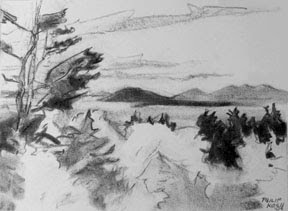 It looks back toward the mainland, to the mountains surrounding Camden, ME, where I'd painted seriously a few years before.  And their memory was clear in my mind as big, broad shouldered and massive.  The shore in reality was some 12 miles or so away and the mountains very just little blips on the horizon. If I'd drawn them as they actually appeared they would have had the impact of wilted lettuce, so I tried pulling them closer mentally. The closer they came, the more the image felt like the Maine I knew.
Truthfulness in this case meant honoring the awe the big forms of the mountains had stirred in me. I think the result is "accurate" only to the degree it expresses the feeling the artist had about the motif.
Edward Hopper Monhegan rockwell kent