Showing posts from August, 2017
Show all

How to Be influenced by a Master Artist 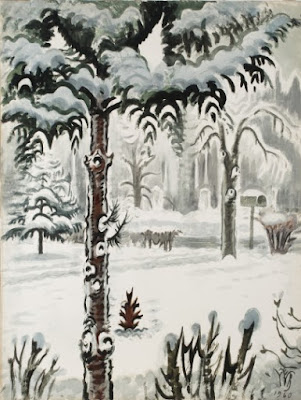 Charles Burchfield, The Constant Leaf , watercolor, 1960, Burchfield Penney Art Center What do you do as an artist when you're excited about the work of a really famous artist?  Should you start working in their style?   Over the last two years I've been serving as the Artist in Residence at the Burchfield Penney Art Center . I've held several thousand of his drawings from their Burchfield Archives in my hands and studied them for all they're worth. One can learn so much from absorbing the methods of the best who have gone before us- but it's tricky. detail from The Constant Leaf Probably it's Burchfield's unusual calligraphy-like details that first catches our eye, as in the detail above. It's an idiosyncratic handwriting he injects into all his work.  In the The Constant Leaf at the top the explosion of patterns in the foliage is a classic example. But a longer look at the painting I think reveals another side to Burchfield
Read more 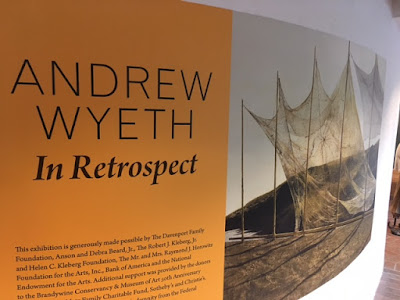 Yesterday my wife Alice and I drove up to see the two Andrew Wyeth shows near us at the Brandywine River Museum in Chads Ford, PA and the Somerville Manning Gallery in nearby Greenville, DE. The Brandywine Museum show, Andrew Wyeth in Retrospect , marks the 100th anniversary of Wyeth's birth. Audrey Lewis of the Brandywine Museum co-curated the exhibition, borrowing important Wyeth works from across the country. I was awed by what I saw. Wyeth has a quiet but insistent power to his imagination. He used "traditional" country and farm imagery but always found ways to show us the unexpected. For many viewers Wyeth's ability to render painstakingly detailed surfaces is the big takeaway. And impressive it is. For me though, as a realist painter who eschews minute details, what really struck me throughout the show was Wyeth's masterful sense of design- the way he realized expressive power by leaving things out.  The early watercolor Coming Storm  (
Read more
More posts