Showing posts from July, 2021
Show all

The Painting That Made the Pastor Scream Philip Koch, Summer, Owings Mills , oil on canvas, 16 x 18 inches, 1974 I found a wide open hilltop in the backyard of a church with a great view overlooking the hills in Owings Mills, MD. This was one of the best pieces I made that year. But it comes with a back story that in retrospect is pretty funny. I had set up my easel on a bright windy day. The sound of the wind pretty much drowned out everything else. The painting was proving hard to do and I was  becoming more and more exasperated. Finally my temper snapped and I abruptly grabbed the canvas off my easel, and cursing loudly, threw it as far as I could out into the field.  What I didn’t know was the pastor of the church had seen me painting and had come out to see what I was doing. He came up to me from behind as  things were going from bad to worse with the canvas. At the moment  he reached out to tap me on the shoulder to get my attention I lost it and hurled the painting. I managed to scare him enough to scream. And
Read more

Sun Worship? My New Painting "Sun by the Truro Door" 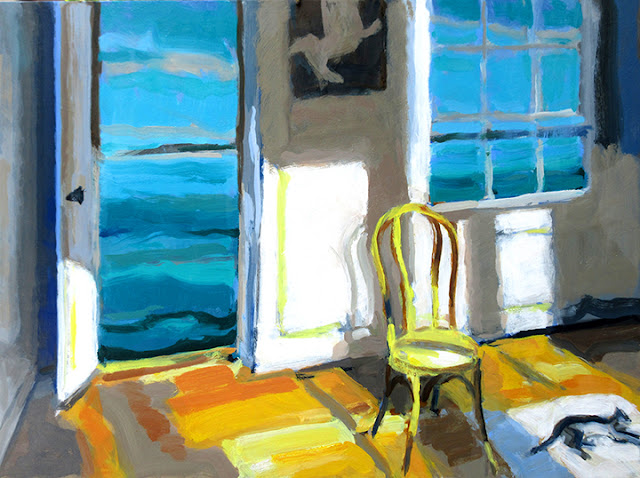 Philip Koch, Sun by the Truro Door, oil on panel, 18 x 24 inches, 2021 Science tells us without the energy that the sun shines down on our planet we couldn't sustain life. It's a big deal.  I think intuitively most artists sense that- certainly many painters (think Claude Monet and the French Impressionists for example) made celebrating the sun's light a core element in their works.  Above is a new oil that is headed up to  Addison Art Gallery  in Orleans, MA next week. I did it entirely from my memory of watching the first rays of the rising sun in the painting room in Edward Hopper's studio on Cape Cod. Anyone living I think has felt the quiet touch of excitement seeing that first splash of morning's sunlight .  I have a long history with that idea. When I was a teenager I wasn't particularly interested in art. One afternoon when leafing through my parents'  Time  magazine I stumbled into Hopper's painting below. "Now  that's  a painting!"
Read more
More posts