The Coolest Painting in the Philadelphia Museum of Art Explained 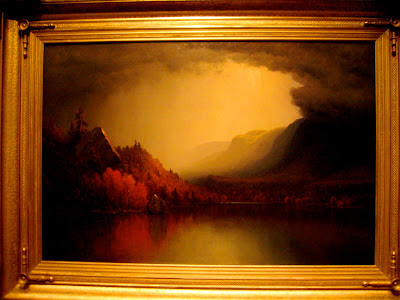 Sanford Gifford, A Coming Storm, oil, painted during the Civil War
My wife Alice took off from her job at the mental hospital yesterday and drove up to Philadelphia with me (actually she did most of the driving, but as women statistically are safer drivers than men, this is as it should be). We were headed to the Philadelphia Museum of Art which since it's in such an old city and got a head start on building its collection has almost an embarrassment of riches. It's one of those museums where there's too much to look at closely.
We took in the Late Renoir show, which impressed me a lot. Renoir was terrific at paint handling. Unfortunately they don't like you to photograph temporary exhibits where they've borrowed work (I suspect mean-spirited Dobermans are ready to be unleashed at a moment's notice on anyone who tries it). But no matter, as their permanent collection galleries are brimming with great stuff.
As a kindness, I thought I'd talk about the best painting in the museum. I've picked it out for you and will offer the definitive explanation of it. Trust me I'm a professional.
Just kidding above. The whole notion of a "best" painting is silly. And any painting worth it's salt is so richly complex that you can talk about it for an hour and only touch its surface. There is no definitive explanation for a painting, or for life for that matter. You just experience it.
I can point out a few things Gifford does exceptionally well though. Looking at the first photo, notice how he creates with his overarching cloud a window that opens up into a much lighter and more cheerful world. He places us in one world and makes us look from it to another. It's a good example of how space can have an emotional component. 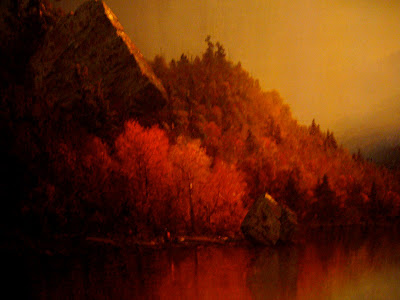 Here's a detail of the left front. See how he layers his trees into different levels, almost like stacking slices of bread upon each other. The light orange trees are over the large rock, the rock is over the tree covered hill at its right, and that hillside is over the sky. 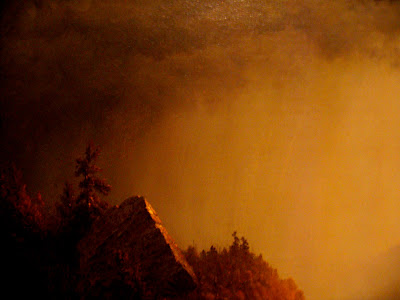 Here's the upper left corner of the painting. Gifford uses a long gradation from light to dark and from warm to cool as you move from the right to the left through his sky. Gradations, especially subtle ones, are incredibly helpful to a painter to imply depth and movement in a painting. Get in the habit of searching for gradations. They're almost always helpful.
Also look at the variety of edges in the trees and the rocks. Clearly the artist wanted the great rock's peak to dominate this section of the painting, so he's subtly blurred the edges of the trees meeting the sky. That's good paint handling. 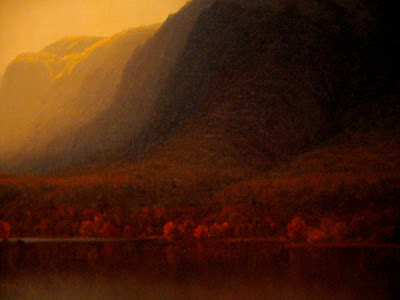 Here's the lower right side, with the dominant mountains sweeping upwards almost vertically.
That could have come off corny and flat, but he anchors them to a well developed foreground shore. The perhaps thousands of trees depicted here have been sculpted and simplified into a box-like volume as they near the shore. It has an almost horizontal top that catches a mid-toned light, and a wall-like side facing us that's all in shadow. You can bet Gifford had to invent some of this to make his world more firm and believable. 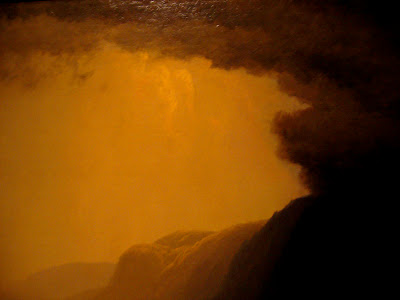 And finally in the upper right he shows us what it means to create an expressive silhouette. He's invented this little zig-zig shape at the far right of the dark clouds that is unexpected but totally convincing. Without it he probably felt his "window" opening into the light filled far distance would have been too predictable a shape- resembling either an almond or a vagina, depending on your preferences. I'll go with the latter. 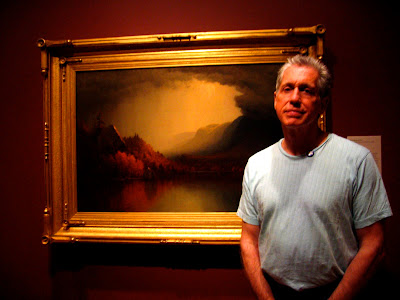 Here's me, calmed and soothed, yet excited to get back to my studio. See what good art can do to you.