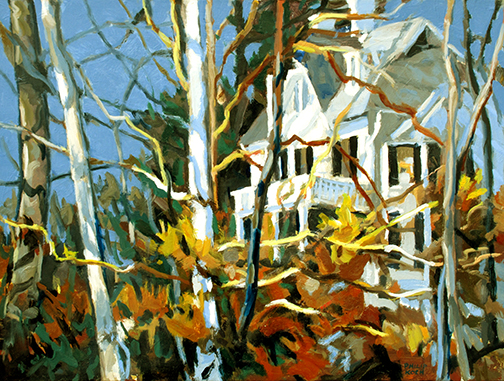 This is my painting "Autumn Frontyard," oil on panel, 15 x 20 inches, 2021 that will be included in Somerville Manning Gallery's's show of my work from April 9 - May 8 in Greenville, DE.
This actually began in somewhat different form back in March of 1985. I painted this on location in the Mt. Washington neighborhood of Baltimore. The large white house intrigued me but seemed too formal, almost like a real estate ad, when viewed from directly in front. But seen obliquely through this screen of mostly leafless trees it took on a whole different character. It was titled "Spring Front Yard."
This small oil I had painted outside served as the basis for a big 45 x 60” studio oil on canvas from 1989 that’s in the Permanent Collection of the Washington County Museum of Fine Arts in Hagerstown, MD.
In late Fall of 2020, under the spell of what was happening to the trees outside my studio window. The season’s colors inspired me to jump back into the small painting I had made years ago. The central foreground tree stepped into a larger role with its orange-gold branches pushing back against the sides of the bright white house. I liked the tension that contrast created. In the end "Autumn Front Yard" felt like a more appropriate title.