- April 29, 2021
Wanted to share a little  background on some of the paintings in Somerville Manning Gallery's solo show of my work April 9 - May 8, 2021. First here's an interview we did about the show
It's with the gallery's director Rebecca Moore. The interview was broadcast 4/28/21 on WCHE 1520 radio near Philadelphia.
Somerville Manning Gallery's exhibition of Philip Koch paintings continues through May 8, 2021
Here are some individual paintings in the show. 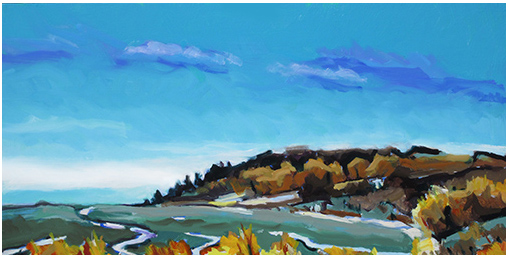 Radiance, oil on panel, 12 x 24 inches, one of the paintings Rebecca Moore talks about early in our interview. This is a view of one of the tidal marshes in Wellfleet on Cape Cod. I originally found the spot by jogging down a road whose name I liked- King Phillip Road. 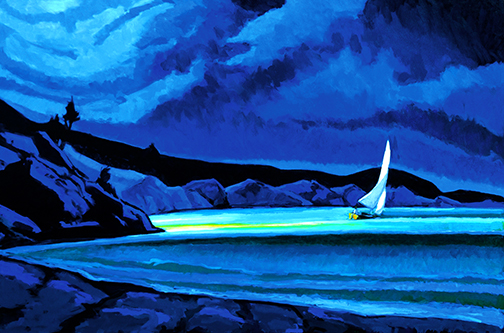 The Reach IV, oil on canvas, 40 x 60 inches, another of the paintings discussed in the radio interview. This is one of my most autobiographical paintings, a tribute to the love I felt from my father who used to take me sailing at night on one of the Great Lakes. Sadly he died very young. In the painting there is a single figure in the sailboat. 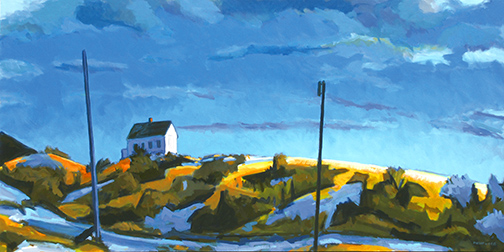 Edward Hopper's Studio, Truro, oil on canvas, 28 x 56 inches, another of the paintings in the interview. I tell the story about why the row of telephone poles on the road leading to Hopper's studio stop abruptly at the edge of his property. This painting is based on an on site oil study I made back in 1983 during my first (of 17) residencies in the studio. Back then the surrounding dunes were much more bare as they were in Hopper's time. In the 19th century much of Cape Cod was stripped of trees to allow farming and for firewood. I believe he chose this spot to build because it offer wide open views of the dunes and Cape Cod Bay. Now these views are largely obscured by the regrown vegetation. To get a good idea of what this spot looked like when Hopper first saw it look at the Cleveland Museum of Art's Hopper oil Hills, South Truro. 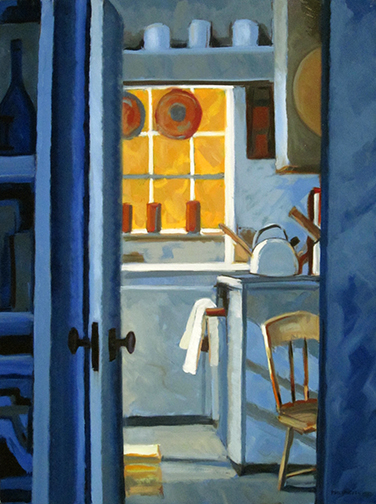 Truro Kitchen, oil on canvas, 40 x 30 inches. I painted this in the large painting room of Edward Hopper's Truro, MA studio. The view is looking down a short hallway into Hopper's small kitchen. Just below the far window is the kitchen sink. When I'm staying in the studio I get up very early to paint in the morning light. One morning as I was sitting in the studio's large painting room I looked up and saw the morning's first sun shine in through a kitchen window. Ironically what caught my eye was a seemingly unimportant white dishtowel hanging off the oven door. It took on a gentle glow that excited my eye and a sense of well being seemed flow over me. This painting is a memory of that little extraordinary moment. 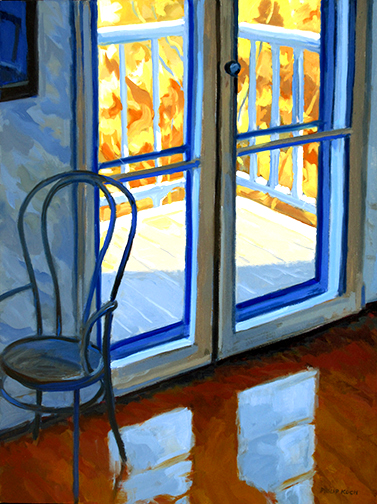 Edward Hopper's Parlor, Nyack, oil on canvas, 32 x 24 inches. A few years ago the Edward Hopper House Museum and Study Center held a solo exhibition of my paintings. Afterwards their Director invited me to return and paint inside the famous artist's home. I did this painting with my easel set up in the family's living room. The room has three large and distinctive French door style windows. They bring in the outside light and cast marvelous patterns on the polished wood plank floor. 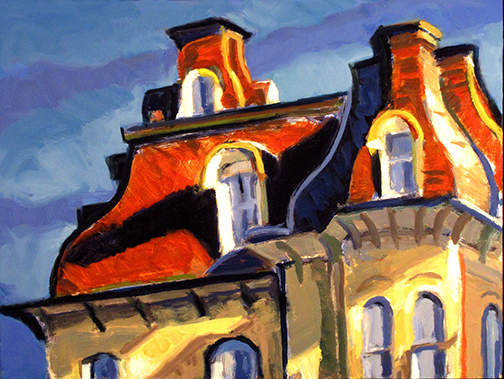 House by the Railroad, oil on panel, 12 x 16 inches. The set for Alfred Hitchcock's famous film Psycho was largely based on an Edward Hopper oil on the Museum of Modern Art in New York that is also titled House by the Railroad. I had traveled to Haverstraw, NY and painted this from the same house that had inspired Hopper's oil. 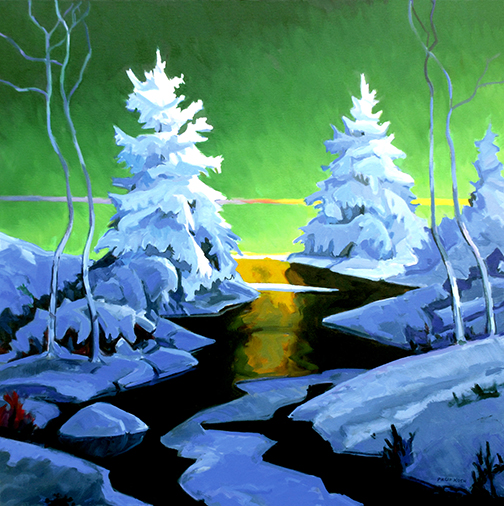 North Star II, oil on canvas, 40 x 40 inches. As a child I grew up on the shore of Lake Ontario. The one constellation I learned about first was the Big Dipper that always appeared over the lake. I was delighted to learn that constellation pointed at the North Star and was proud I could alway find which direction was north by locating that star. Later on I learned the North Star played a role in guiding escaping slaves from the American South to freedom. 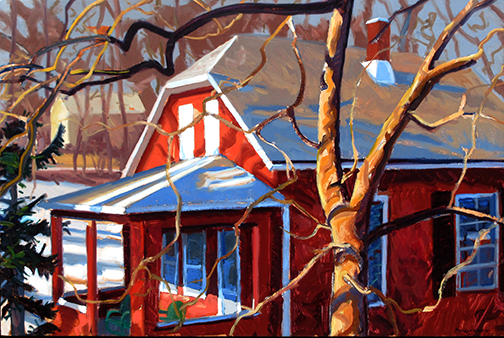 Returning, oil on canvas, 28 x 42 inches. The title refers to how looking at this house made me feel. When I was in elementary school I would wait for the school bus in front of an old house in the forest that looked much like this red house. I discovered it on my old jogging route and found every time I passed it a surge of memory would pull me back to those days of childhood.  Sadly this red house was pulled down by a developer to make way for a row of suburban tract houses. 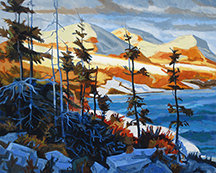 Another of the paintings we talk about in the radio interview is Mountains by the Sea, oil on canvas, 40 x 50 inchesMy wife Alice and I honeymooned on Mt. Desert Island in Maine years ago. I feel in love with the place. Since I work from direct observation instead of from photos I had to set my portable easel up all the way out at the edge of a high precipice about the cold sea to get the best point of view. It was nerve wracking as I could only step back 2 feet while I was painting. Anymore and I'd fall over the edge. You have to be a little nuts to be an artist. 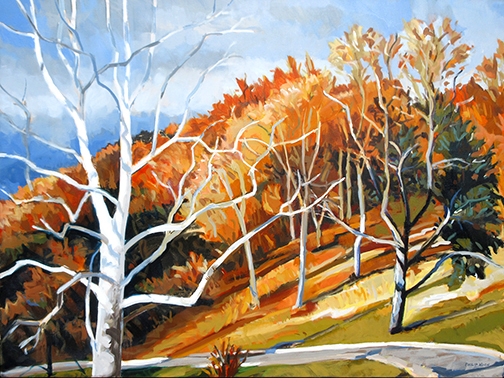 Late Autumn Sun, oil on canvas, 36 x 48 inches was done as part of my being the Artist in Residence at the Burchfield Penney Art Center in Buffalo, NY. I had grown up in nearby Rochester and had fallen in love with the many white barked sycamore trees that grew there. The Burchfield Residency gave me many chances to go back to Western New York and paint the kinds of sources I'd grown up with. This painting was included in the 2018 solo exhibition the Burchfield Penney Art Center held of the work I'd down during my 3 year Residency. 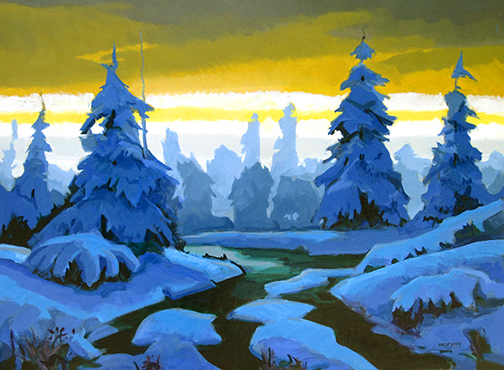 Uncharted II, oil on canvas, 30 x 40 inches. I mentioned waiting for the school bus in front of a farmhouse above when talking about the red house painting Returning. This is my memory of the view I'd look at across the street- an expanse of trees at the edge of an old growth forest. Especially after one of the heavy snows we often had in those years it beckoned to me to skip school and explore its mysterious uncharted terrain. 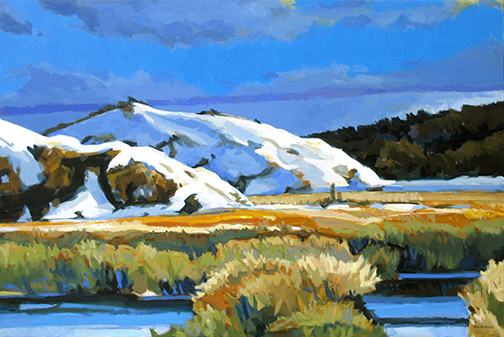 Before I had visited Cape Cod I used to think the paintings Edward Hopper made of the Cape were a bit fanciful and surreal. But when I first started painting on the Cape I was amazed at the huge sand dunes of very white colored sand. I realized Hopper was more truthful than I'd originally thought. This is a painting done from memory of how the dunes near the mouth of the Pamet River in Truro looked when I first began visiting the Cape in the late 1970's. Back then there was much more open sand visible. Now much of it covered with the slowly regrowing ground cover and trees. 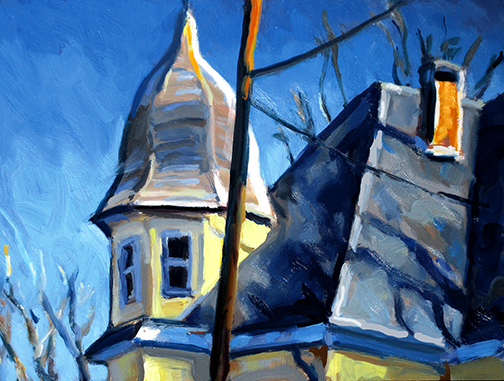 Turret House, Nyack, oil on panel, 9 x 12 inches. This was painted from a house a couple blocks from Edward Hopper's family home in Nyack, NY. Though you can't see it, the house is perched very close to the banks of the Hudson River, enough to make you wonder if it might fall in. Hopper's memory of this house was a key source for his painting done years later, The Lee Shore. 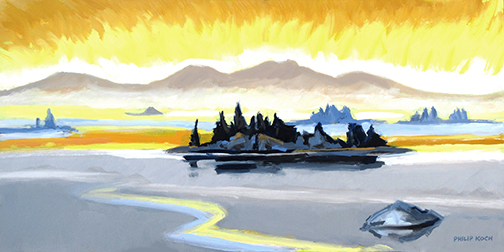 Awakening, oil on panel, 12 x 24 inches. I painted this from a hill above Stonington, ME looking at the sun rising behind the mountains on Mt. Desert Island. The brightness of the sunlight bowled me over.
Two paintings on the first wall are Edward Hopper's Studio: Truro and North Star II. 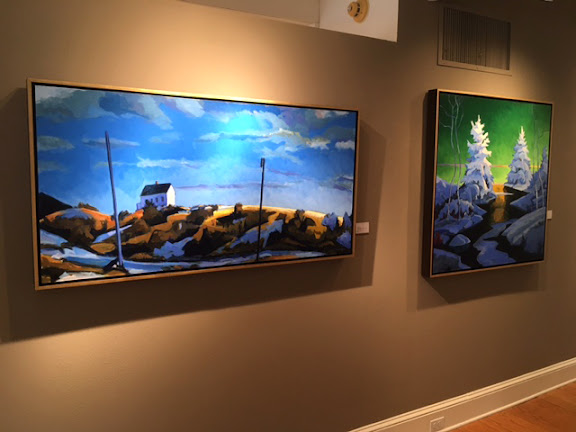 A view of the back room at the gallery. The two large paintings are (at left) Bright Morning and (at right) The Reach IV. 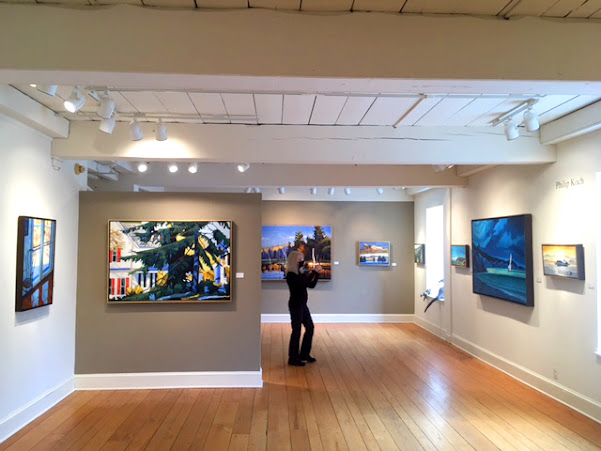 This is a masked version of me standing between Edward Hopper's Parlor, Nyack  and the red house painting Returning. 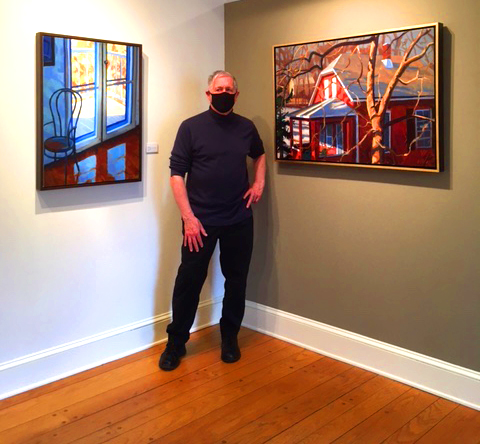