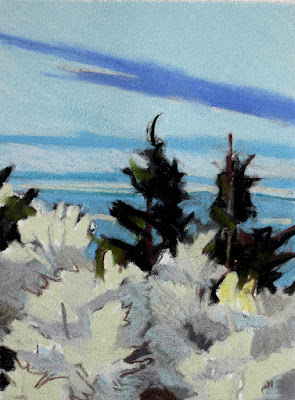 I'm just returned from another week at the Burchfield Penney Art Center (BPAC) in Buffalo, NY. This was my second stay as part of my being Artist-In-Residence there for this next year. It is a chance to do a lot of my own paintings all around Western New York State. This is the landscape where I was born and grew up- it's indelibly etched in my visual imagination. On a personal level it is deeply satisfying to me to paint here.

One of the places I'm painting is at Chestnut Ridge Park, south of Buffalo. It's a place that was an important source for Charles Burchfield's art. Above and below are two pastels I made about the vista there that looks north to Lake Erie. 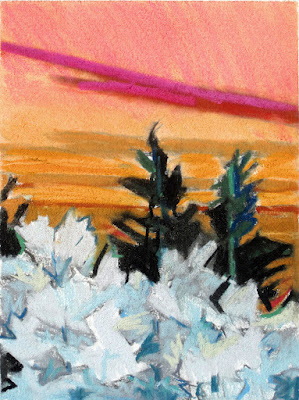 
Both are based on the vine charcoal drawing below that I made on location with my portable easel. 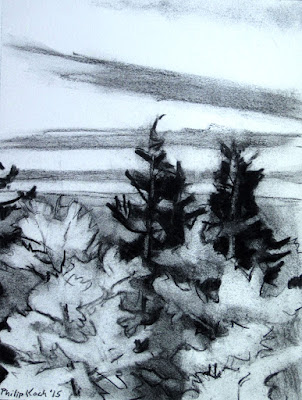 For many years I've adopted a method of working in a series - doing preparatory works in drawing media and in oil on a small scale before committing to creating a major painting.

It takes time to let visual ideas percolate down to their essence and become clear in my mind's eye. Studying Burchfield's work during my last two stays at BPAC I realized that Burchfield devoted enormous energy to making preparatory drawings for his paintings.

While there I am slowly going through some of BPAC's extensive Archives. It contains an astonishing 20,000 Burchfield drawings. While some Burchfield paintings were rapidly painted and completed he often would take his time, working up to an idea very gradually.

Here are two pieces that intrigued me. Both are very freely drawn studies he made as he was searching out how to present an idea in an upcoming painting. They're surprisingly large, about 15-18" across. 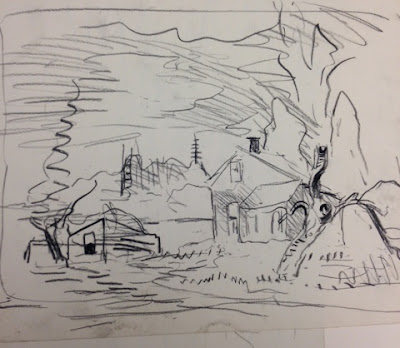 He took his time, circling around his idea sort of like a cat stalking its prey. Here he tries out two very different approaches to compose a gnarled tree and a small house- lighting the house first from the left above and then from the right in the drawing below. 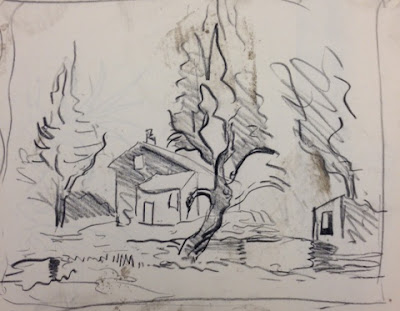 Whether these two particular drawings later led to one of his large watercolors I don't know. But they are telling evidence of his relentless searching for just the right forms to make his inner vision come to life.

We see in Burchfield's paintings memorable spontaneity and the great trust he placed in his intuition to guide him.  Yet he made a veritable mountain of sketches and preparatory drawings. When he planted his ideas in a field it was only after he had waited until its soil was fully, and artfully, prepared.