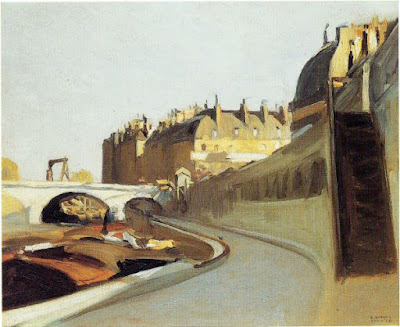 Hopper in his 20's went to live in Paris three times. He saw the work of the French Impressionists first hand. He liked what he saw- particularly the brilliance of the way they rendered sunlight with dazzling color. Above is a Hopper oil of Paris from 1907. It is a symphony of creamy yellows, whites and grays.

One can't understand Hopper without giving his Impressionist-inspired love of light and color its due. What confuses people is that Hopper also loved solid volumes and crisp forms, while they think of French Impressionism as all buttery soft brushstrokes. Think late Monet like the famous waterlilies.

But earlier in their careers the French Impressionists usually showed their fascination with light and color employing solid forms and crisp edges. That was the side of earlier Impressionism that Hopper picked up on and carried with him throughout his career. 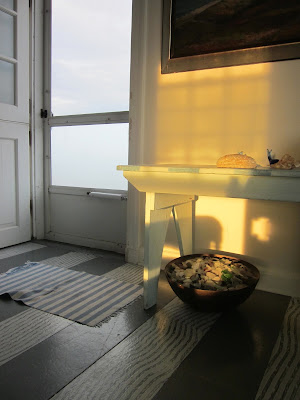 Above is a photo I took during my last residency in Edward Hopper's studio in Truro, MA on Cape Cod. It is his painting room at the first light of dawn. Hopper designed the studio himself adding lots of windows all around. He used the place as a sort of observatory to study (and celebrate) the marvelous effects of  Cape Cod's light.

Below is a painting I made standing in the studio's kitchen of the small table where Hopper and his wife Jo ate their lunch.   Hopper looked at this same sun-splashed wall daily, drinking in the chords of white contrasting the golds outdoors. One thing that helped me paint this painting was remembering standing in the Butler Institute and studying their Hopper Pennsylvania Coal Town. Hopper taught me how to see color. 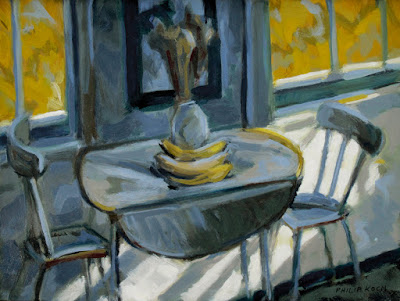 Hopper wasn't a French Impressionist of course.  But underneath his hard edged severity was a man who generously offers up to us big helpings of extremely sensuous  color.