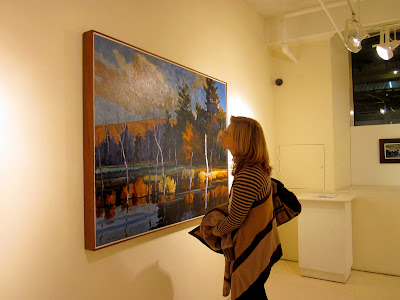 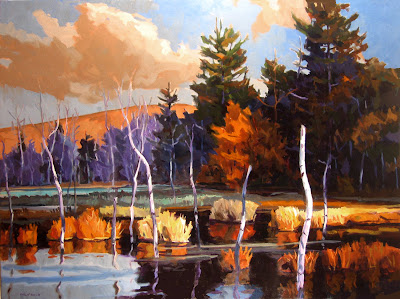 Here's a tour of my second solo show at New York's George Billis Gallery that is on display until Jan, 19, 2013.

I want to say something about each piece in the show, so probably I'll do this in three parts. You can enlarge any image by clicking on it.

Let's start with the images above. This is Inland, oil on canvas, 44 x 55", the largest piece in the exhibition. For many years I've loved painting the forest interior in New England and the Adirondack Mountains. Often beaver ponds have caught my imagination, like this one. These furry little engineers clear out some of the trees, giving a landscape painter a shot at painting a deeper space like this one. 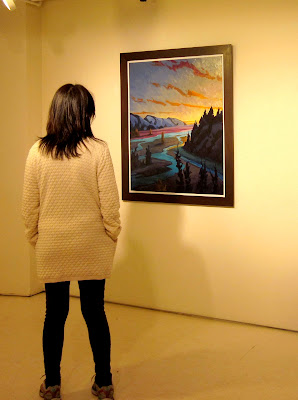 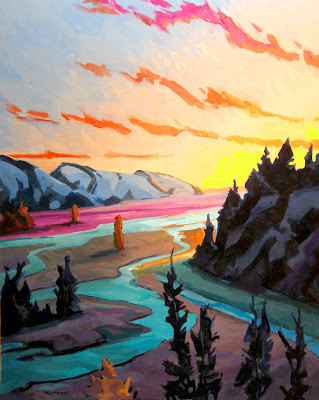 Ascension is a large oil painted entirely from my memory and imagination. As the title suggests it conveys a feeling of rising up as its central focus. For many years I had been doing long horizontal paintings of the sand dunes on Cape Cod. But I remembered one of my favorite sensations being on those dunes was lying in the sand and looking up at the sky. Knitting those two worlds together is what this painting is all about. 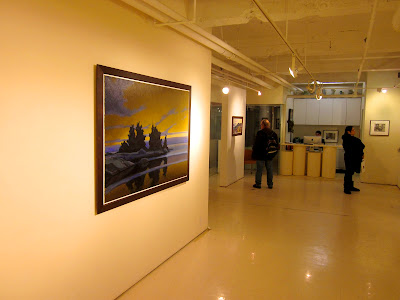 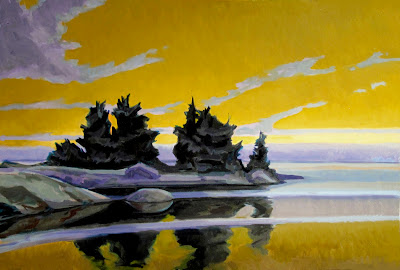 Again, like most of my major pieces, this oil is painted from memory and imagination. Stemming from my growing up on the shore of Lake Ontario, where as a boy I watched literally thousands of sunsets descend over the horizon, it also combines traces of more recent experiences on Cape Cod, Lake Champlain, and the coast of Maine. Making a painting like this is dipping into each of those different times and places and getting them all to add some special element to an overall conversation 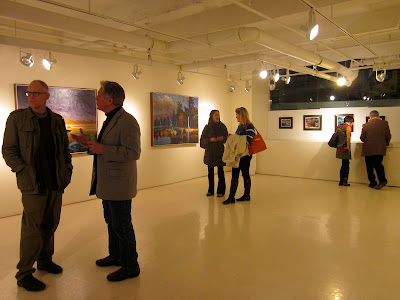 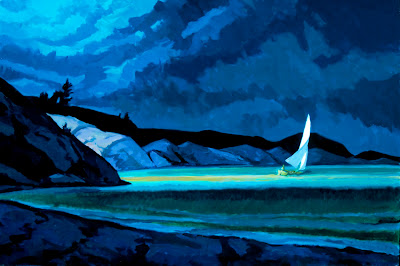 Here's the last of the fours larger pieces in the show, The Reach IV,  oil on linen, 40 x 60". (my large canvas, Otter Cove was talked about in my previous blog post). The Reach IV is psychologically intriguing in that it combines imagery connected to my actual father and that of Edward Hopper, who for me is something of an artistic father figure. My dad was one of the most taciturn people you'd ever have met. Yet despite his usual silence, he had a warm quality of "being with you" when he spent time with me. This was never as true as when he'd take me sailing in a tiny boat out on Lake Ontario at night.

Sadly he died right after I turned 13 which left me with a somewhat rudderless feeling. Six years later though I fell under the spell of the famous American realist painter Edward Hopper's work. I loved his intense sunlight and long, poetic shadows. But truthfully, I think a big part of my attraction was that in his photos, Hopper bore a strong resemblance to my dad.

The shoreline the boat in the painting is sailing past is the beach just below the Hopper studio on Cape Cod Bay in S. Truro, MA. When my wife and I have stayed at his studio, one of our favorite things is walking along the beach and looking up at the dunes Hopper enjoyed in his days.

Here's this wall of smaller oils in an unobstructed view.

From left to right they are: 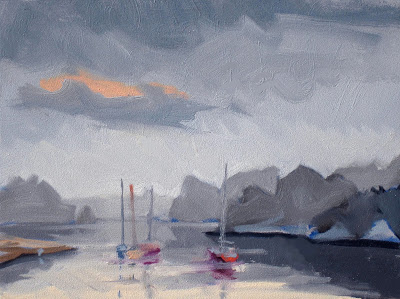 Mouth of the River, Connecticut, oil on panel, 7 1/2 x 10" that I painted over the course of two blisteringly hot days this summer in East Haven, CT. There was an delightful heavy fog early each morning that only burned off slowly, casting the riverbanks into a series of elegant silver grays. 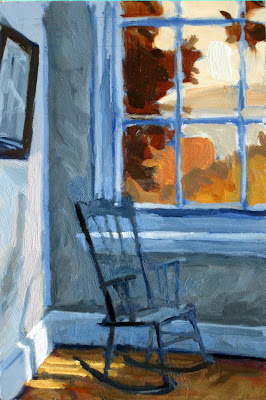 Hopper Bedroom, Nyack, oil on panel, 13 x 8 5/8", 2012 was painted this summer up in the second floor bedroom where Edward Hopper was born and where he slept each night until he was nearly 30.

The view out this window, looking down onto one of Nyack, NY's busiest commercial streets and off to the Hudson River one block away, was to be an enormous influence on Hopper throughout his entire painting career. I spent three afternoons this last August painting this window and one of the Hopper family's rockers. I came away from the experience understanding how much of what we love about Hopper was his ability to hold onto his early childhood experience and translate its vividness into paint. I highly recommend to any Hopper lover a visit to the Edward Hopper House Art Center in Nyack. You will come away with a far deeper understanding of Hopper's remarkable creativity.

I think that's enough for now. In the next couple of days I'll continue touring the show with you.