Last week I was up in Connecticut for the grand opening reception for the Art Essex Gallery where nine of my oil paintings are hung in their inaugural exhibition. While there I did some painting right down on the water in East Haven, CT where the Farm river flows in to Long Island Sound. My old fried Bob Wetmore who I've known since elementary school days has a place right on the River. It's got amazing views. Above is Connecticut Shore,  oil on panel, 8 x 16", 2012.
The view is looking due east with Long Island Sound's open waters off to your right. This Connecticut low country played a big role in American art history- for example the American Impressionist landscape painters who gathered in Old Lyme. But for me this is special territory more for the work John Frederick Kensett (American 1816- 1872) who created some of the most amazing paintings from the 19th century of the shoreline of Connecticut and neighboring Rhode Island.
When I first started looking seriously at landscape paintings, it was Kensett more than any other painter who convinced me that landscape painting could be as surprising and as radical as any other style of art. That's a conviction that has only grown in me as the years have gone by.
What inspired this oil was the morning mist that cast a cool veil over the far distance. One of my very first moves was to lay in a band of light bluish greys in the distant water and contrast that with some subtle yellows in the foreground ripples.
In truth the cool v.s. warm contrast from front to back wasn't as clear cut as I painted it. But I knew I needed a little extra chromatic drama. There was an elusive glow from the sunlight passing through the moisture laden air. It was delicious and the colors had to evoke that.  This special quality to the light is the kind of phenomenon I believe you have to be there on the spot to experience it before you'll be able to paint it. A painter has to invent the chords of colors that create the feeling he has inside- if you stick to only hues that can literally be observed you're likely to miss the stir of emotion a really good scene provides. As Degas often observed, you have to tell little lies to get at the bigger truth with a painting. So it was here.
While I was painting probably 30 different sailboats went by. I experimented will all sorts of placements for the boat, at one time having two sailboats gliding along together, but in the end I chose to underplay the boat in favor of the landscape and clouds. No one painting can be about everything. 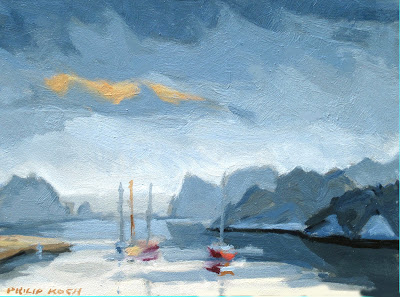 Here's the other painting from the week,  Mouth of the River, oil on panel, 7 1/2 x 10", 2012. This is painted from the same vantage point as Connecticut Shore, but here I've turned to look toward the north. The Farm River is flowing southwards toward Long Island Sound behind us. It's very early morning and there's only the three sailboats moored in the river to keep us company. Again my eye was caught by the mist turning the distant peninsulas to silver grays.The sky in real life was absolutely cloudless and at first I painted it empty. But compared to all the stacking up overlapping planes in the painting's bottom half, it felt too low energy. So I invented some gradations and shapes to keep the bottom forms company. 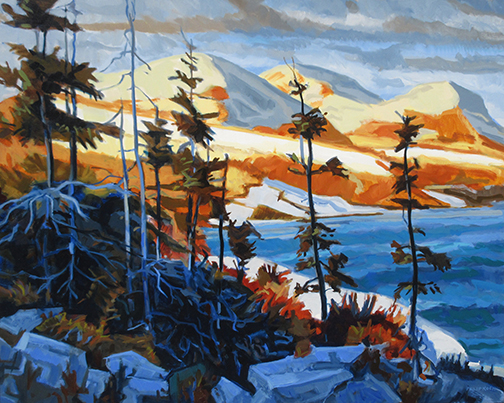 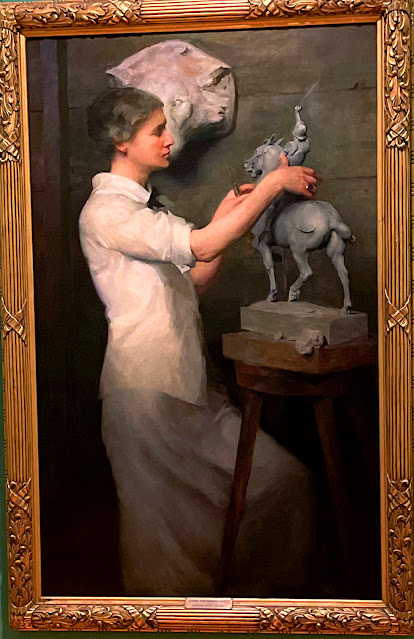 Survival Guide to the Art World 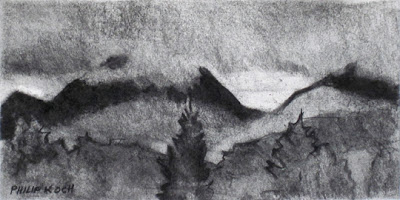 Philip Koch, Adirondack Charcoal #2,  vine charcoal, 7 x 14", 2011 A drawing by Sol LeWitt Navigating today's art world can be dizzying. Nobody's got a compass. Above are two examples of contemporary drawing. The first is my own, Adirondack Charcoal #2, vine charcoal, 7 x 14", 2011 that I made up on location in Lake Placid, NY last fall. The second is by Sol LeWitt, American, 1928 - 2007, a prominent conceptual and minimal artist. I paired the two to show how far apart the outer boundaries have been set. Last week I received an email from an art historian, Veronica Roberts, who's writing the catalogue raisonne on LeWitt. She's trying to track down information on a LeWitt drawing that was "made" by two students at my old school, Oberlin College in 1970. LeWitt is labeled conceptual because he was playing around with our notions of what we expect drawing to be. I think his intent was to "do the art part" well before his drawings made i
Read more