Just returned from Essex, Connecticut where on Saturday evening I attended the grand opening of the new Art Essex Gallery. They have a really extensive show up of work drawn from the George Billis Gallery in New York. The space is absolutely enormous (apparently it was at one time a grocery store) and is beautiful for showing art. There is a lot to like in the inaugural show.

Every time I go to an opening of a show of my own paintings I resolve that I am going to get good photos of the work and the crowds, and this time was no different. But then I get carried away looking at all the art and then fall into conversations with visitors. Before you know it the evening is over and my camera hasn't yet made it out of my pocket.

I did get some quick images on my phone, and think they are at least helpful to give you a sense of scale of the individual pieces (for better images of the paintings look at  my previous blog post).

Above is me standing in front of my 84" oil The Morning, a Cape Cod view I'm particularly proud of. (Notice I'm wearing the fetching Edward Hopper House Art Center t-shirt presented me the Hopper House in Nyack, NY in thanks for a talk I gave there a few months ago.  And here's a view with the grinning artist removed to give you a glimpse of the other half of the painting. 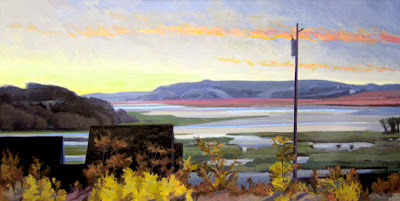 While up in Connecticut I stayed with my old friend "Bob from Cub Scouts."  Bob and I met in early elementary school and have stayed friends ever since.  Our mothers were actually our Den Mothers for our Cub Scout group. He's no longer in Cub Scouts (Bob was always something of a high achiever) but turned into Dr. Robert S.Wetmore, orthopedic surgeon. He was on call for the weekend and did six surgeries just on Friday, which tells you this guy has got stamina!

Over breakfast on Saturday I was treated to a blow-by-blow demonstration on napkins of how he would insert a titanium rod to reattach a motorcyclist's femur that was currently in two pieces. Partly just thinking about the afternoon's operation made me queasy, but another part of me was intrigued. For many years I've taught artists' anatomy as part of my Life Drawing Class at MICA and have developed a certain fascination with the mechanics of how we stand and move our bodies. And isn't the femur everyone's favorite bone?

I considered becoming a surgeon for about 5 minutes when younger. I fainted dead away in my junior high school auditorium in front of several hundred other kids when they brought us together to watch an anti-smoking film that featured a lung operation. When you're a guy in the eight grade, that is about the most humiliating thing imaginable, leaving me so internally scarred that I had no choice but to become an artist.

As a teenager I spent lots of time in Bob's home (his parents always made me feel more than welcome). It was situated about 20 feet from Lake Ontario. Bob just bought a new home, a condo literally perched on the rocks above Long Island Sound. Upon seeing it my immediate thought was Bob had recreated his boyhood home at last. I smile about that, as in my own way that's exactly what I do through the paintings I make. A number of my blog posts over the last few years have remarked about how much of my old neighborhood I summon up as I paint the old familiar forms- rocky beaches, steep hillsides, deep forests, and a whole lot of watery foregrounds.

The novelist John Irving in one of his earlier books (can't recall just which it was) comments that so much good writing has happened when the novelist reaches back and picks up the old memories of childhood. These are the most vivid of images, Irving explains. They have to be to have survived in the back of the mind all those years into the writer's adulthood. Certainly it's true for me. I suspect for my friend Bob purchasing a new place to live by the water is a way for him to reach back and touch one of the best parts of his own growing up.

Warning: Don't look at the next photo of Bob's living room if you're prone to jealousy.

Here's a photo of my easel yesterday morning set up right outside of Bob's condo on Long Island Sound. There was a wonderful mist in the air that lent everything a touch of silver gray. I'm looking north up the little Farm river moving inland towards the middle of CT. It was a great motif for painting!