Edward Hopper House in the Moonlight 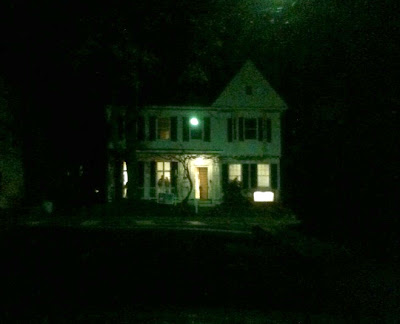 Saturday evening I was up in Nyack, NY at the Edward Hopper House Art Center attending a talk by the set designer James Youmans. He was a great presenter. His talk got me thinking that both set designers and landscape painters have the same job- to lend a sense of personality to an empty space. I think in the back of the mind of any realist painter is a sort of imagined theater stage waiting to be populated with buildings, forests, mountain ranges, you name it. I know I think that way.
Leaving the Art Center, which was the birthplace and boyhood home of Hopper, I walked to my car parked on the side street and slid behind the wheel. This is the view that confronted me through my windshield. The nearly full moon had just risen and was brightly reflecting in the second floor window of Hopper's house. Hopper must have seen just this scene dozens of times growing up. Certainly he drank it in deeply, as the feeling of it kept coming back in so many of the oils he was to paint in subsequent years.
I've spent lots of time up on Cape Cod, sometimes staying and working in Hopper's Cape Cod studio in South Truro, other times in nearby Wellfleet or Provincetown. Looking at the Hopper place in Nyack Saturday night I couldn't help but be reminded of Hopper's painting of an inn in Provincetown, Rooms for Tourists. The house is still there on Bradford Street, looking every bit as it did in Hopper's oil. 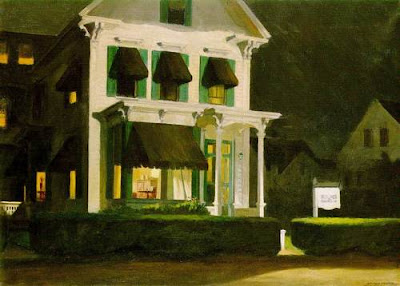 It's a painting that celebrates the color of light, cooler highlights on the outside of the building and warmer light inside. Look at how Hopper sneaks into the composition the play between the orderly windows on the illuminated front of the house and the irregular geometry of the lights in its shadowed left side. Hopper is saying to us "look at how surprising even the most ordinary of scenes really is." That is art doing its job of waking us up and showing us that living is extraordinary, despite our tendency to allow our senses to cloud over and our feelings to dull.
Of course the other Hopper that comes to mind is his oil Summer Evening. Surely he based it in large part on his Nyack porch. There's a feeling of awkwardness to the scene- the young woman's rigidly straightened out pose compared to the man's more relaxed and asymmetrical positioning. I always imagined them to be a romantic couple where things might not be working out so well (please tell me I'm not the only one writing that script for these two). 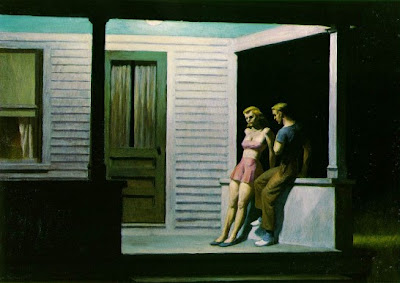 Hopper has far fewer forms to work with in this composition than in the preceding oil. So instead he maximizes the expressiveness of the clapboard siding on the front wall of the house, taking great pains to gradate the color and tone of the light as it falls from the overhead porch lamp. There's a real glare to the lighting that adds a certain unease to the mood of the figures.

Just for a contrasting view of relationships, look at this wood engraving by Hopper's classmate at the New York School of Art, Rockwell Kent. Like Hopper's couple, the two figures are bathed in a sharp light from the above left. And they pose against an inky blackness. But there the similarity ends, as Kent prefers to strike a more gentle, sensuous, and far more optimistic note. 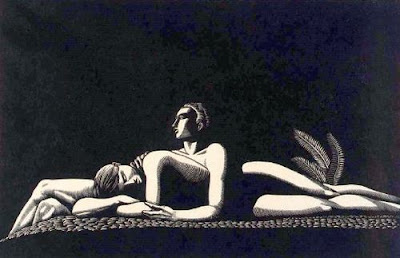