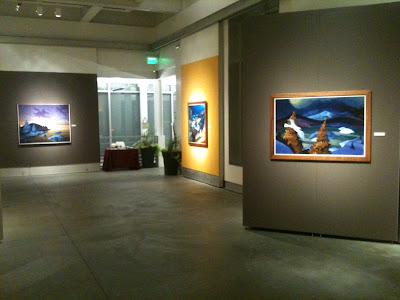 Here's another view of the current Saginaw Art Museum exhibit, Unbroken Thread: The Art of Philip Koch (through Feb. 19, 2012). At the right is my oil Equinox, a work that I felt looked especially good in this venue for the show. In this photo you can see how all the tones in Equinox were held down into middle tones and darks except for the flying white bird at the left and one snow covered island in the distance. I think that's where the bird is headed. It's critical to figure out which of  your ideas in a painting are going to be the ones that command the viewer's attention. Spotlighting just two key forms as I did here is one time-tested way to accomplish this.
In the distance at the left is Otter Cove that I discussed in the previous blog post. In that painting I've put the emphasis on the big dark hillside at the left side and brightly backlit it with a glowing light on the left horizon.
Ryan Kaltenbach, SAM's Curator and Deputy Director hung a dozen works from 19th and 20th century landscape painters alongside my own paintings in Unbroken Thread to provide some historical background.  Here's one by an old friend, the 19th century American painter Jasper Cropsey, A Summer Afternoon from 1853. 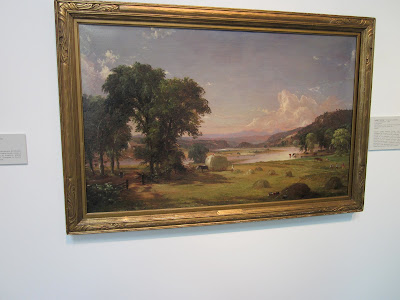 I say old friend because a similar Cropsey oil was one of my first serious introductions to landscape painting when I entered Indiana University's MFA program in 1972. The IU Art Museum had a Cropsey that I used to study over and over again. It fascinated me how the artist had divided up his painting's space into overlapping planes.I knew I had to learn how he did it so well. They marched from the foreground all the way back to the sky, each one having its own distinctive color and tone, yet all hanging together wrapped up in a warm summer atmosphere.
When I was in undergraduate school at Oberlin, nobody had ever mentioned pictorial space. To me figuring out how to build a convincing space was a huge discovery. I learned from Cropsey some of the moves I use to this day in my paintings.
Also included in the exhibition are these two Charles Demuth (American, 1883- 1935) watercolors. Totally different than the Cropsey, these two are much more about moving the viewer's eye across the surface of the painting. Cropsey did that too but his main focus was to plunge the viewer into the picture's distance. In Cropsey I feel myself thinking about close and far, in Demuth it's much more about up, down, left, right. 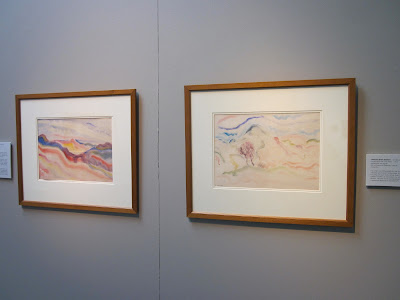 Yet each has some of the other, flat design and depth. One of the all but impossible tricks a painter has to  master is to see reality as a flat design of shapes and colors, AND as a world of volumes and depth of space, at the same time. How do we do it? Honestly I don't know other than to say it's accomplished only with great effort. Certainly I would say to any aspiring artist, or to any art lover, that they should practice trying to see in both ways. The more one concentrates and practices using one's eyes, the easier it becomes.
Here are the two Demuth's in the show with my oil Ascension  in the distance. 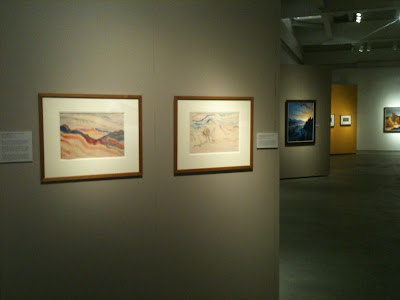 Here are two more of the accompanying paintings Ryan Kaltenbach added to the show. They're by Charles Warren Eaton (American 1857 - 1937) and were both painted in 1905. They show a real influence of George Inness I feel. Both show that dual aspect of two dimensional design on the surface and a desire to pull the viewer's eye way back into the shimmering far distance. I think they're really nice paintings and I'm honored to show my work with them. 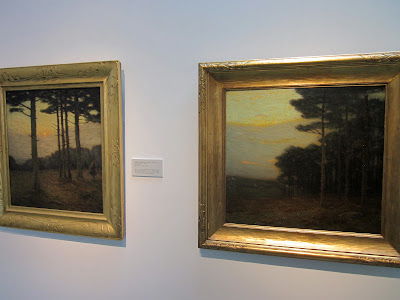 Following up from those two dark Eaton oils, here's a view from the central part of SAM's big gallery showing from left to right my North Passage, 45 x 60", Ascension, 40 x 32" and Down to the Bay, 36 x 72". Especially with the two on the left you can see me borrowing the dark foreground idea that Eaton used so effectively in the paintings I talked about above. 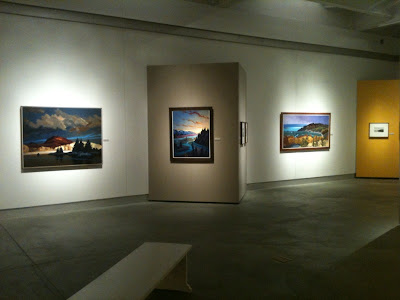 I've always been lucky as a painter because so many of the artists of the past seemed to offer me help in telling my own story. When I first started painting everyone around me seemed obsessed with being "original"and was struggling to come up with a "new idea" that they could paint. I too fell into that  way of thinking.
But early on my feelings started to change, especially under the influence of seeing Edward Hopper's work. It struck me as misguided to think that we living now were somehow especially privileged, that we had been blessed with a superior understanding compared to those who have gone before us. People a hundred years ago thought and felt as deeply as we do today. I'm convinced of this by the amazing expressiveness of the art they left behind for us.
But it is not up to us to repeat the past. We can't. And if we try we always fail. Reality is always bigger than we are. We comprehend it only partially. I believe the world looks and feels a little different to us than it did to our predecessors. If you look at paintings from the 1930's there is an unmistakable feeling for volumes and movement that is just different than how anyone paints today. My take on it is that unconsciously we all today process things a little differently than before. Because of this the job of contemporary artists is to come up with new combinations of light, forms, and colors to give expression to how we feel today.
Cropsey and Eaton and Demuth painted how the world felt to them in their time. To us their work feels both engaging and just a touch foreign. My paintings feel they are made in this time, our time. A hundred years from now, landscape painters will have changed again. It all makes for a long and fascinating road.
Yes, I wish I could look forward and see what's coming around the bend. But I can look back down that long remarkable chain of landscape paintings- Demuth and Hopper, Inness, Thomas Cole, Constable, Ruisdael and Rembrandt, and so on. It's wonderful to be part of something bigger than yourself. All us painters can only hope we fill our place on that road as honorably, and as artfully as we can.
art history art museums. my history Art philosophy art technique Edward Hopper museums