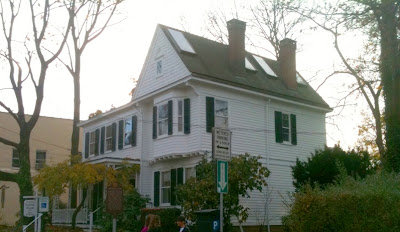 To readers in the Mid-Atlantic area I want to announce my Sabbatical Exhibition at the Maryland Institute College of Art in Baltimore opens this morning (through Dec. 18, 2011 in MICA's Decker Gallery in the Fox Building, 1303 W. Mt Royal Ave., Baltimore, MD 21217). There are six oils on display, two of them of Edward Hopper's "other" home, his studio on Cape Cod, and the other four are recent medium to large panoramic landscapes. There will be a public reception Thursday, Dec. 8 from 5 - 7 p.m.
Above is Hopper's boyhood home. I write a lot about Hopper because he played such a pivotal role in my early art education. His long shadows and bright sunlight just pushed me off the cliff where I'd been standing and painting my acrylic color abstractions. It wasn't a soft landing that I made as I began to teach myself how to paint as a realist, but I knew the prod from Hopper had started me on my path home.
In the last post I was talking about my sense that much of what Hopper painted throughout his life was powerfully tinged with the memories he carried of his boyhood home in Nyack, New York. This white building is the Edward Hopper House Art Center as it looked late last Saturday afternoon. This is a view that Hopper knew well- very well. He was born in the bedroom that's behind the two second floor windows at the far left. That room served as his bedroom for the next 18 years.
Below is one of his watercolors of a house in Gloucester, MA, that looks an awful lot like the home he'd left behind. He painted many more like it. 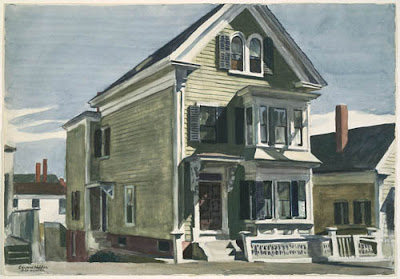 There are many painters whose work I love, but probably none I've studied in as much depth as Hopper's. His paintings were for me like beloved lessons from an old teacher. I always tell me students that one of their jobs is to find "additional parents" from among the artists of the past. People who will teach them what it is they need to grow into the artists they're meant to become. I focus on Hopper so frequently because my past is so bound up with his paintings. The more I learn about Hopper the better I understand myself as a painter. So bear with me...
Here's a detail of the front of the Hopper house. 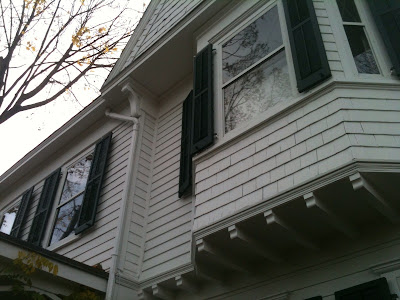 Not surprisingly big shuttered windows on white clapboard houses figured prominently in his work throughout his life, as in his oil Cape Cod Morning below. 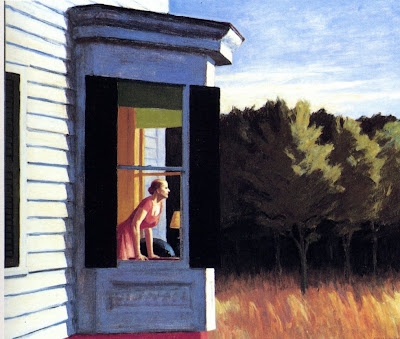 Let's go back up to his bedroom on the second floor. I took this photo in the late afternoon when a touch of sunlight diagonally grazed the wall. 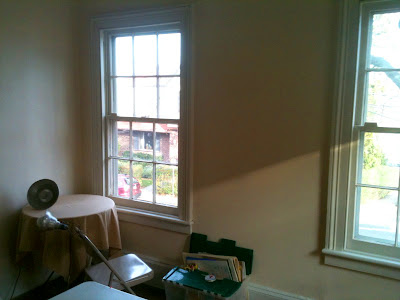 Looking at the photo I was reminded of his Sun in an Empty Room. 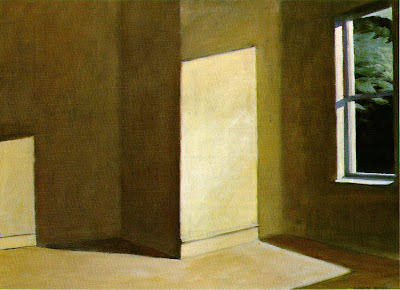 Here's another view looking out his bedroom window. 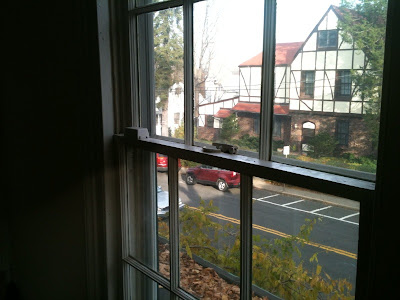 My wife Alice and niece Jenny doing something Hopper did thousands of times. 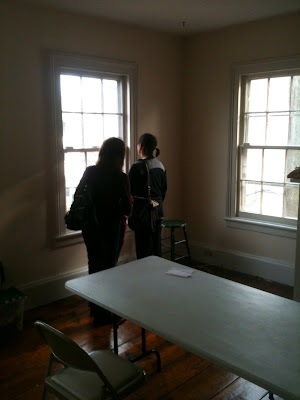 Another view of one of those bedroom windows. 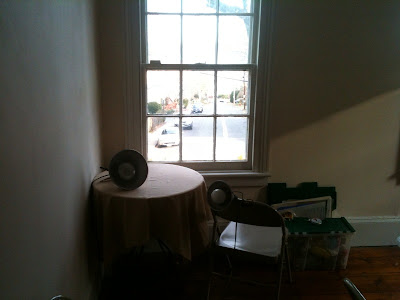 There must be at least a dozen oils by Hopper of a woman staring out a similar window. 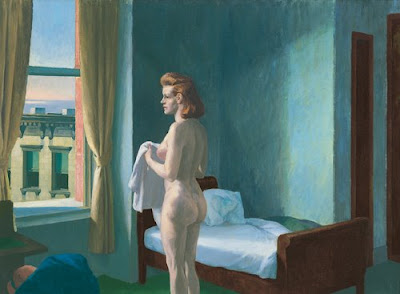 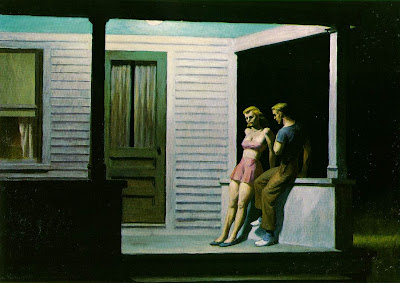 Here's Alice and my daughter Lou talking on the porch last Saturday. 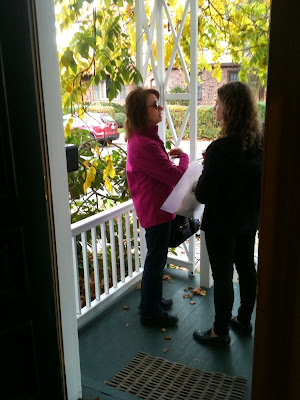 I myself used to paint lots of architecture. Usually my houses were similar to Hopper's oils of white houses. The funny thing is, unlike Hopper, I grew up in a sort of California modern style house with of all things a giant round living room (my dad wanted something out of the ordinary). After my dad died when I was 13 that home became a much less happy place, enough so to propel me to look to 19th century styles of houses when I began painting outdoors years later.

About 15 years ago that began to change. My eye was drawn away from painting buildings towards reveling in the all natural world. Traces of human presence began to feel like an intrusion on the more romantic imagery of an untouched land. The one exception to this has been the series of paintings I've been doing of the interior of Hopper's Cape Cod paintings studio in S. Truro, MA. I've been working on them on and off during my 13 residencies staying and painting there. This coming spring I'll be showing a small group of them at the Hopper House Art Center.
Edward Hopper my history 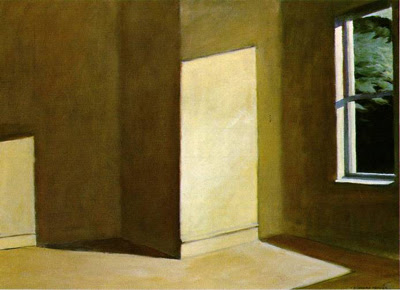