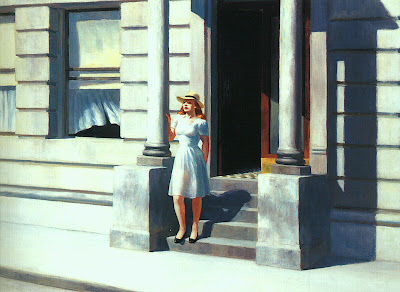 Tomorrow the truck comes to take 49 paintings of mine down to Newport News,Virginia for my show at the Peninsula Fine Arts Center. (The show has an opening Friday evening July 22 from 5:30 - 7:30 p.m. If you're in the area please come by and say hello. It will run through October 2). I still have a few more paintings to wrap up so I'll just make comments on one painting in this post (maybe, just maybe, that will make me short winded). Above is one of my favorite paintings that lives just up the road from me at the wonderful Delaware Art Museum. It's Edward Hopper's oil Summertime.
All painters have to work with is playing off opposite qualities against each other. If you want to express darkness you can only do it by contrasting it against some surface that's very light. That's how our brains work.
The same is true of expressing movement. In this Hopper a young woman basks in the bright sun while standing on some grey limestone steps. The steps and the building are composed entirely of straight lines and almost all of them run either vertically or nearly horizontally. There's a big, simple and solid feeling to these classical forms. It looks like this was a no nonsense structure that was built years ago and that it will survive all of us.
Hopper was a genius at telling his story with light and shadow. Squint your eyes at the painting. Observe  how the dark vertical rectangles of the left window frame, the front doorway and the shadow of the column at the right side of the painting pop out to establish a dominating geometry. Hopper has learned that every painting has to have an overall mood or feeling to its forms. Here he's saying clearly he wants stability and weightiness to be the main story. But it's not the only story.
Against all that, Hopper poses a young woman on the steps gazing, chin up, in the direction of the sun. In contrast to the staid necessity of the stairs and building, her silhouette is all curves and angles. Her flesh is colored with peach-like hues and her dress's translucent fabric allows the pinks of her thighs to peek through the folds at you.
And she's not alone. The shadow she casts on the stairs is, like her figure, an abstraction of rounded shapes. Keeping the woman and her shadow good company, the white curtain in the open window catches a breeze and billows upwards for a moment, causing its bottom edge to curve into little scallop-like shapes. (Compare that to the detail of the white curtain in the far left window who dutifully hangs down with straight vertical folds).
That blowing curtain, the softness of the young woman's curves and the rounded shadows she casts on the steps configure together to play off against the regular unmoving geometry of the building. Perhaps Hopper is commenting on stability and permanence and comparing it to the more quickly moving living forms of the woman. His painting is a dialogue between these two very different qualities. That he gets them to so gracefully fall into conversation with each other is a hallmark of his mastery as a painter.
Hopper lived a long time and he no doubt reflected often on the passage of time in a person's life. I've always felt this painting circles itself around these themes. That he can do so in a painting that otherwise so beautifully celebrates the brilliance of sunlight itself as it shines down on our world is to me a very great accomplishment.
One last thing, a pet peeve of mine. So often, too often in my book, Hopper is inevitably described as the "painter of loneliness." Well, maybe so, but he was much more than that. If you get to Delaware and can go to the Museum and see this painting in the flesh, I think you'll be charmed and even entranced my the amazing number of subtle little colors Hopper sneaks into his forms. Particularly the woman and her outfit are just sumptuous. Yes, Hopper tended to paint solitary figures. But so often if you look really closely they're painted with an amazing richness of elegantly selected restrained colors. Probably Hopper was clinically depressed and had by many accounts an irritable personality. But he also came up to the plate with a regally sensuous side. And he painted with a generous spirit that put a heck of lot of surprising color into his paintings.
art museums art philosopy Edward Hopper