In The Garden of the Muse 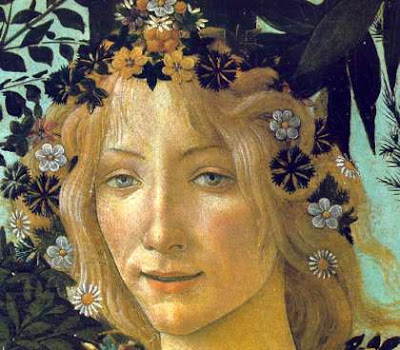 It's ironic that we find it so hard to say something meaningful about the arrival of Spring. This week I was out driving somewhere and the sudden eruption of fluffiness on all the trees hit me with full force. The world seems to be getting another chance. In a way there's nothing more important, Yet at the same time I realized as much as its magic was moving me, I had no special new words to convey how this stirred me.
When words fail, humans have usually reached for their art and music to help. Above is a detail out of the Italian renaissance artist Botticelli's famous celebration of Spring, Primavera. The woman seems to me curiously modern and very beautiful, almost like she exisits outside of time itself.
Last year when spring rolled around I was nursing a back injury that prevented me from doing much in my garden ( and finally sending me to physical therapy, which worked beautifully. On the spot  turning me into a believer that Physical Therapists can sometimes work minor miracles). This year I was able to do a whole lot more, including laying down 400 lbs. of crushed white marble chips that look great in accenting the paths through my plantings.
It was hard work and wondered why I was doing it. I don't literally believe in The Muse who inspires and guides aritsts to do their best work, but still that myth fascinates me. I have an urge to make my studio look inviting, including its grounds. Rationally I know I'm doing it for myself, but on another level part of me imagines I'm inviting more frequent visits by that goddes of creativity, The Muse.  Surely she'd love nothing better than the intrigue of a artful garden as she decides who to visit. Below is me in the garden just behind my studio last week. While I won't be putting up a sign, in my mind I've named my backyard "The Garden of the Muse". 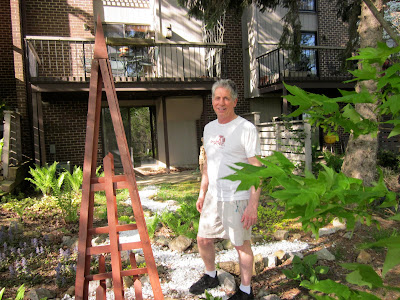 It took me two days to spruce up the garden. And then the following two days I did two new oils in my studio that turned our way better than I'd hoped. Sure, I know it's a coincidence, but indulge me in my fantasy that I've just been paid a visit by that invisible and elusive Muse. I bet she looks a lot like the woman in my detail above from Botticelli. I'll be showing you the results soon, but for now I want to keep them (and the traces of that mysterious goddess) all to myself.
And if anyone's curious, here's the entire Botticelli Privmavera below. 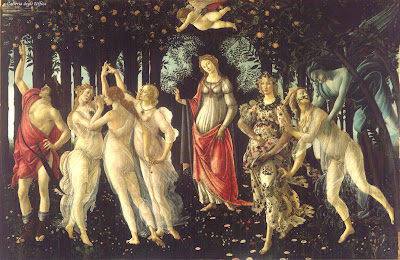