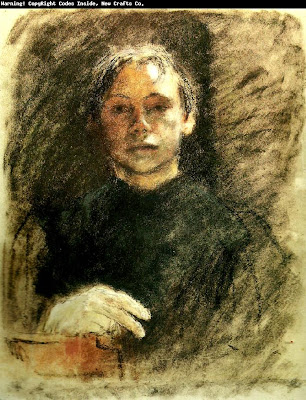 From time to time we all need to recharge our internal batteries. One of my power sources is this artist- Kathe Kollwitz ("KAY-tuh KOLE-vitz"), the twentieth century German printmaker. Nobody ever drew women as well. Her vision of the feminine encompasses great physical strength, remarkable delicacy, and sometimes terrible vulnerability. In my book she's head and shoulders above the much better known (in this country) Mary Cassatt.

Above is a self portrait she did as a young woman done in a soft medium (likely conte crayons) on rough paper. Beautifully evoking the light as it plays over the planes of her forehead and cheeks, it swells up with her youthful energy and promise. It seems to be saying "here I am and I delight in looking at the world." 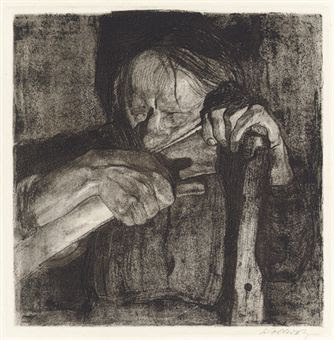 Above is a very different vision, an old woman using a stone to sharpen her scythe. Again Kollwitz builds the image around the play of light and shadow. Illuminated by a lamp from below, the figure looms over us in a slightly threatening way. If you look closely at the woman, you realize she is both incredibly solid and volumetric and at the same time is presented to us through the most elegant flat shapes that thread their way across the whole composition. Just one example is the remarkable silhouettes of her hands and wrists. The artist is finding her subject's personality in a part of the body so many other artists rush past in their hurry to draw the face. Kollwitz is too sharp to overlook them.

Kollwitz also did a great deal of illustration for posters for humanitarian and progressive causes. Below is an example- a family group of three heads that work together beautifully as a whole. Notice how the drawing gradates gradually getting lighter as you move from the man at the left through the child to the woman at the right. 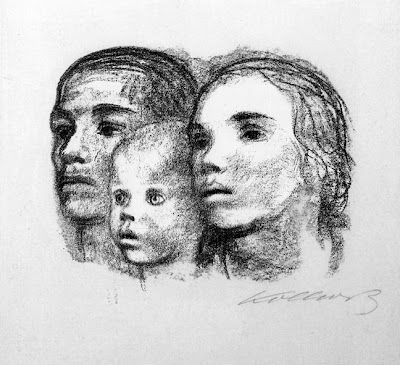 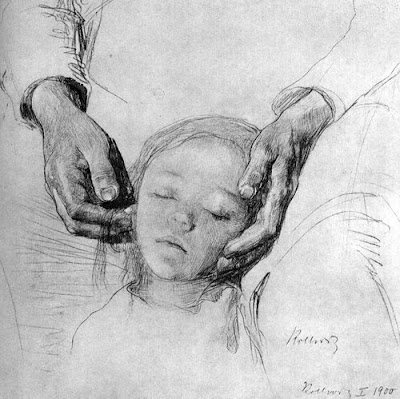 Above is I think my favorite drawing of all Kollwitz's works. With just a few sparse lines, the artist establishes the parent's knees to hold the action of the drawing, the child's head. The large hands that cradle the child obviously are no strangers to hard physical labor, Look at the tenderness with which the fingers of the left hand finger a few strands of the child's hair.

Here's a final illustration Kollwitz did in 1924 to raise funds to feed the literally starving children who lived in the poor neighborhood where she lived. The victorious Allies after WWI demanded severe reparations to be paid by the defeated German government. Naturally the burden fell not on the well connected wealthy politicians who sent Germany to war but to the ordinary people. Kollwitz lived in the slums of Berlin with her husband, a physician whose practice was doctoring to the urban poor. Kollwitz saw hunger on her doorstep. 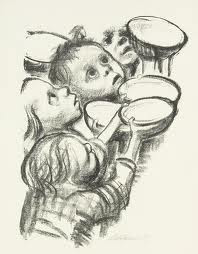 (A grateful thanks to my friend Carrie from the gym (a.k.a. Buff Carrie) who interrupted her weight lifting to figure out how to spell "scythe" for me)
art history drawing Kathe Kollwitz