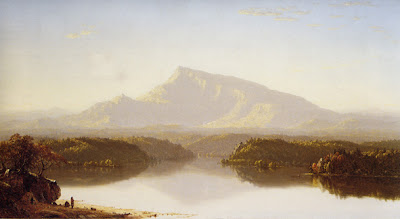 There's a slippery quality to color. It's like trying to pick up a buttery noodle off the floor- sometimes you get it, other times it just won't give you any traction at all. Fortunately some very gifted people have wrestled with just such problems and by their example, we can grab and hold on.

Above is an oil by Sanford Gifford, The Wilderness, now in the Toledo, Ohio Museum of Art. It was painted right before the U.S. Civil War. Gifford's basic idea is to conceive of the world as suffused in a soft orange-yellow light. He undoubtedly painted this oil over a warm sienna-colored ground. Most of the painting's surface glows with that warmth as he purposefully allowed it to show through the subsequent pigment layers. In a few places he puts in some relatively cooler colors- mostly a neutral grey. Swimming in the field of warm colors, the greys are the exception. They know their place is to play a supporting role to the dramatic leading role assigned to the warm colors.

Below is a second Sanford Gifford oil, this one of the Hudson River (that kindly lent its name to the movement of artists Gifford was a part of).

In this second painting, Gifford reverses his thinking, imagining the world is a mostly cool, bluish place. Almost everything seems to have some blue in it, with a few pinkish clouds emerging out of the bed of coolness that is the sky. A warm-hulled boat does the same in the foreground.

What's key in both these paintings is Gifford's decisiveness, choosing to let one color dominate his picture. Had this been executed in a heavy handed way, the paintings could have had a harsh and mechanical quality. Instead Gifford is an absolute master of gradating the color's temperatures and intensity. You look a long time at a Gifford painting before you find an area that isn't carefully gradated. He knew this would give his skies and water a certain gentle pulsing energy. And he has a terrific eye for creating mist-laden atmosphere. 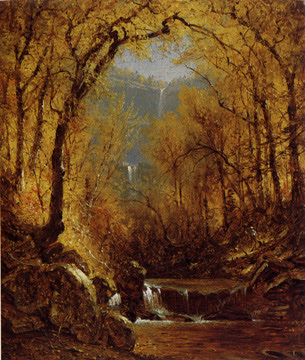 And here's a final Gifford, Kauterskill Falls, now in the Detroit Institute of Art. He returns to the idea of covering the whole surface with a warm gold ground as a foundation. Then as if he took a mat knife in hand, he cuts out a "keyhole" in the center of the forest. This intriguingly carved opening reveals a far distance that seems borrowed from our second painting, the cooler blue Hudson River scene. He keeps the blue far distance way toned down. Against all the sienna and yellow in the foreground it seems cool enough as it is. You can see into the artist's imagination through this painting. He's saying "I'll make a  warm world with just a bit of cool color that will be the exception." Gifford was about subtlety. But in his hands that's a far cry from indecisiveness or timidity.
art technique color