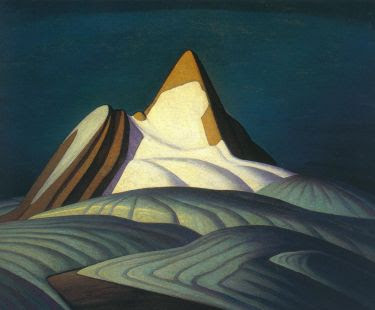 Here's a painting perfect for today's Winter Solstice- Lawren Harris, Isolation Peak, oil on canvas. (Harris was a Canadian landscape painter active in the earlier years of the 20th century. He's sort of a northern equivalent of the American regionalist painters Charles Burchfield and Grant Wood)
I grew up on the extreme northern border of the U.S. on the shore of Lake Ontario. As kids we imagined that if we so much as put our toe into Lake Ontario we were leaving the country. My mother had gone to school in Toronto and seemed to have warm memories of the experience, so I imagined that across Ontario's waters this place called Canada must be something special. In a way it is. The farther north you go, the lower the sun hangs in the sky. On sunny days the shadows are poignantly long and sharp- just the stuff to excite the painter's eye.
It's fascinating to compare the above Isolation Peak with the Lawren Harris below, Mt. LeFroy. Both start out with the same basic composition of a triangular peak smack in the middle of the canvas. But then Harris, a master of inventive design, went to work. Snow is one of the bread and butter tools of a northern landscapist because nobody really knows what it's supposed to look like. This frees the painter up to arrange the snow any way they can to heighten the expressiveness of the painting. In Isolation Peak, Harris uses the snow on the otherwise sienna colored mountain to make a shape that's moving in a different direction than the mountain's steep pyramid. If he hadn't the shapes would have been too simple to generate the painting's enviable energy. I also love the contrast of the intense color of the exposed orange rock against the moody toned down blue and green greys of the rest of the canvas.
Mt. LeFroy below uses a more pattern filled blanket of snow covering the mountain. It looks a bit like the folds of a hanging curtain. Again Harris goes against a too simple idea, throwing in a couple of unexpected shapes breaking the pattern in the snow. 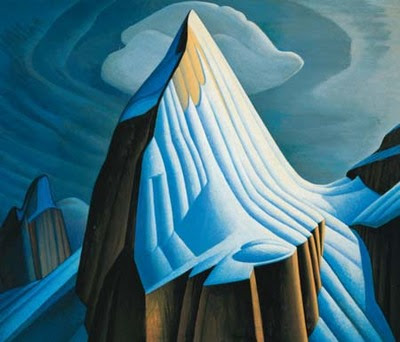 Harris is an intriguing guy. He can combine the most muscular massive shapes ( I think of a dumbed-down Arnold Schwartzenegger) with the most delicate and lace like pattern. Below are two small oils by Harris that have the look of plein air studies. In both the insistent patterning dominates, but Harris gives you just enough solid, empty areas to let your eye rest. 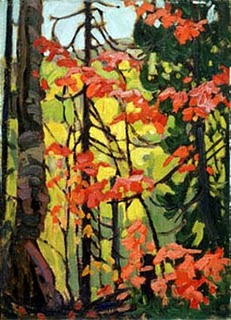 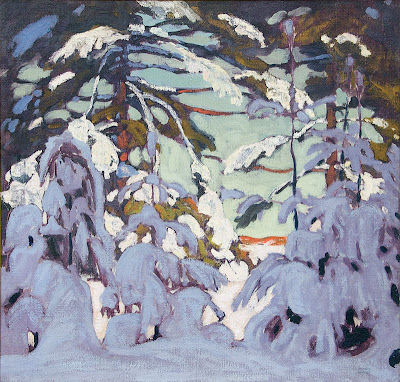