A Cure for Impatience- Drawing 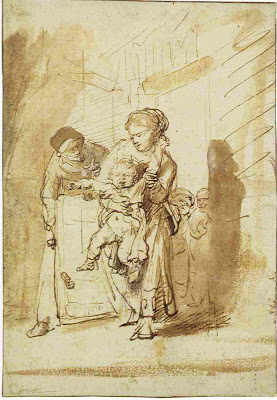 Here's an ink wash drawing by Rembrandt. Almost 400 years since the guy drew it and it still has things to tell us.
Look at the elegant anatomical precision of the woman's head at the left! (you can click on the image for a larger version).
Actually I'm pulling your leg. That head isn't particularly well drawn. But therein lies much of what is so good about this drawing. Rembrandt was using this drawing to help him discover what it was in this scene that he was most genuinely interested in. Instead of a polished finish we get the feeling the artist is groping his way forward. Initially he's not sure exactly what he's after.  He uses the time spent making this drawing to slow himself  down and sift through the possibilities. It's funny as one would think one knows what one likes. Yet art shows us our first answer may not be the best answer.
So often a piece of art fails because the artist tries to do everything and ends up accomplishing very little. Rembrandt's genius lies in his selectivity. He's a master of what to leave out.
I think I'm attracted to this drawing because I'm a parent and am well acquainted with sometimes unruly little children. The kid is squirming all around. You can see Rembrandt at first drew the child in lightly and then decided he wanted to emphasize the energy in the kicking legs. So he goes back in with a darker line and traces the wonderful space between the kid's knees. It's his way of saying "look here." In comparison, the child's head is left very light and faint.
Looking at the woman who holds the child, you see her firm resolve running through the emphatic diagonal that runs along her right leg and shoulder. The rest of her body, including her head, is left
far less resolved. Rembrandt refuses to overload her figure with distracting details. He goes back into the drawing and accents just the shapes that best express the feeling. Given his talent, he tends to find them in unexpected places.
The woman at the left is underdeveloped as she serves almost as a frame to the woman who struggles with the child in the center.  And off to the right is a shadow cast by the central figures. It frames the action from the opposing side of the drawing. Together they seem like wings that have spread wide open to reveal the big story in the center.
Often at the art school where I teach I'll come upon a student who's painting from a photograph they've taken. Their eagerness to get the thing done fills the air. Almost always there's trouble brewing with too many focal points. I want to suggest they do an ink wash or vine charcoal drawing first before they leap into their oil pigments. Art isn't about hurrying. Rather it involves taking the time to see something more clearly. Doing drawings of your idea before you paint it can be a way to slow yourself down. We need time to notice the things others overlook.
My wife Alice likes to tell people I'm the least patient person she knows. Fortunately early on I discovered drawing and how it slows one down. Maybe I'm not the most patient person, but I do make lots of drawings (link to the Drawings page on my website). 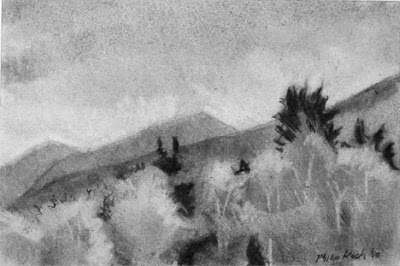