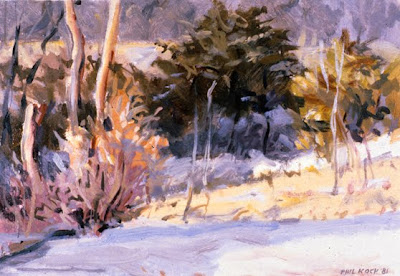 Philip Koch, Lengthening Shadows, oil, 6 3/8 x 9 3/8"
1981
Last week I started scanning old slides of some paintings I haven't seen in literally decades. I've just finished teaching my two classes at MICA and will be working on and off over the summer getting my old paintings' images in digital form. In the fall I'll be on sabbatical so the project will likely continue. Almost all of the work I've done since the seventies has long since gone to various collectors, and I honestly can't hold clear images of all I've done in mind.
My plan had been to hire a student to do the scanning, but already that seems to be going out the window. Truth is, I like the physical act of slide scanning. I feel like Harrison Ford in one of those old movies where he's opening up some dusty tomb and discovering jewels and silver. The real delight is I like most of what I'm finding.
It's funny but on seeing the old paintings again a rush of memories pulls me right back to the time and spot where I painted them. There's lots to choose from to paint outdoors. That's the promise and also the problem. As a painter you're asked to fall in love and then pare down the object of your affection to it's barest form. It's so much about selection and leaving out. If you try to put it all in you come home with a mess instead of a painting.
In Lengthening Shadows above I remember that I loved both the elegant textures of the two orange bushes and the intricate patterns in the yellow grasses. The small painting only had room for one of these ideas, so the wonderful grasses had to be painted in blandly smooth. You feel like apologizing to the grasses like you're trying to let them down gently. But you have to do it. You can only ask the viewers eye to juggle just so many balls at once. To overwhelm them is to lose them. 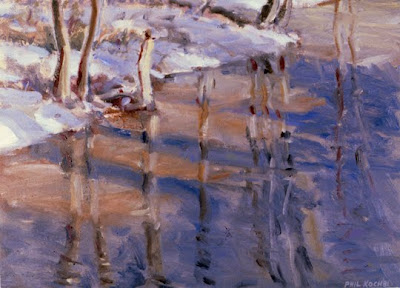 Philip Koch, Sunlight on the Water, oil, 8 5/8 x 12"
1981, Collection of John Hartje and Carol Camper, New York City
In the river painting above I remember there were three times as many vertically reflecting tree trunks in the water. But I liked the diagonal shadows sweeping across the water's surface more, so the reflections had to mostly go.
My other memory was that it was bitterly cold. Had the air not been completely still I couldn't have lasted that long with my portable easel. The water in the calmer parts of the river kept forming a thin skin of ice that would then break off with a sharp cracking noise, pulled downstream by the current. It was a cool music to paint to. Also amazing were several wet furry muskrats that paddled busily along the river edge, doing what ever one does to be a muskrat. Like most small mammals, they took little interest in my painting.
My paintings have evolved some since the early eighties when these two were painted. But what I'm doing now is built on all those small oil paintings I did out near the streams and frozen fields. Reality (or nature as the old painters loved to call it) has a four billion year head start on even the best of us. It pays to spend a long, long time studying her chords of shapes, spaces, colors and shadows. They are the stuff we are made of.