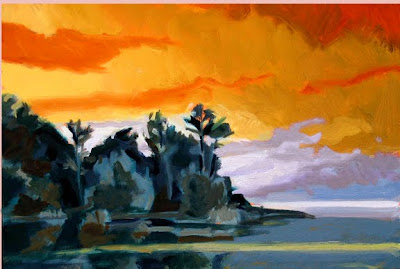 Philip Koch, Quiet Shore:Yellow, oil on panel, 10 x 15"
2010
Here's a new painting. I was thinking about the composition of the oil below featured in the last blog post. Became curious to try it with a different sort of light altogether and used a slightly larger panel. 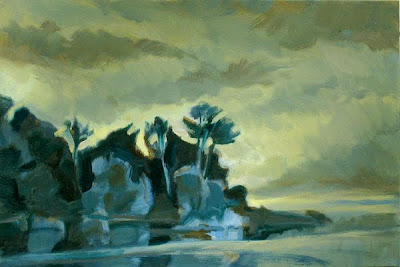 Philip Koch, Quiet on the Shore, oil on panel, 7 x 101/2"
2010
I always feel there are more aspects to a place, or a person, than we can experience at one time. Explorations like these two paintings nod their heads toward that idea. Claude Monet is the most famous example of an artist trying out the same basic forms in many different colored versions. He did it with haystacks, a Rouen cathedral front, and poplar trees. Edgar Degas was even more fanatical with the idea, producing the same essential pose in seemingly endles streams of pastel drawings with each having its own unique color arrangements. He would use tracing paper and go at the same composition over and over. Degas said " Draw the same drawing ten times. Draw it a hundred times." Did he mean this literally? Probably not. But the force of his sentiment is clear.
Monet and Degas grasped the enormity of trying to wrestle with thousands of variables all at one time. For them painting wasn't a casual reach for an inspired idea. Rather they struggled for each inch of their progress. Their working in sustained series testifies to their relentlessness in pursuing deeper understanding.
art history Art philosophy