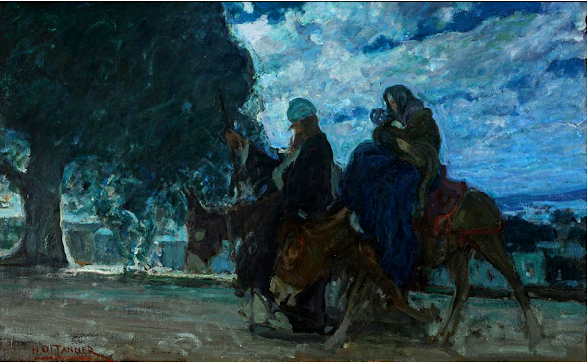 Andria Derstine, the Director of the Allen Memorial Art Museum in Oberlin, OH sent out a holiday greeting yesterday and chose as an illustration an oil by Henry Ossawa Tanner (1859- 1937), Flight into Egypt. I've always thought Tanner, an important African American painter, was too little known and was happy to hear my alma mater's art museum added one of his paintings for their collection in 2017. To me he's an impressive painter with supreme visual skills.
Tanner was a religious man and depicted the Holy Family leaving Bethlehem in 15 paintings over his life time. Clearly this was a story the guy wanted to tell. His painting has a way of drawing you in whether or not you're traditionally religious.

Painters tell their stories through how they shape things. Tanner first makes a crytalline sky that casts a mysterious atmosphere over the scene. Riding under a cloak of darkness we see the Holy Family with hardly a detail. But Tanner entices our eyes to focus on them by sharply silhouetting the dark figures against a lightened sky. Together with the legs of the donkeys they coalesce into one unexpected and intriguing abstract shape. (I think they were supposed to ride on donkeys, my Sunday school days were long ago).

The other thing pulling my eye into this story is how colorful Tanner makes his night scene. In reality a moonlit night out in the countryside is relatively monochromatic. Tanner though enlivens the overall cool blue light of the evening by injecting a surprising warmth of dark red-brown into his animals. It gives the image an extra little jolt of energy that tells you there's something going on here.

Happy to see (and learn from) this little gem.