Charles Burchfield, North Wind in March, watercolor, 47.5 x 59.5 inches,
1960-66. Ogunquit Museum of American Art
When I first saw Charles Burchfield's paintings as a young art student I didn't like them at all.
To my teenage eyes Burchfield's landscapes seemed cartoon-like and childish. It didn't help that he had lived in Buffalo, NY. I was from the next town over, Rochester, and wanted nothing more than to see myself as fully grown and sophisticated. Burchfield reminded me of everything I was desperate to leave behind.
Leaving home to go off to college opened a new world to me. Most exciting of my discoveries was modern art. I decided to become a painter, and early on worked abstractly under the influence of Minimal Art and Color Field Painting.
Burchfield seemed to go just the opposite way. Most of his strongest work is of his little hometown. He found there aspects we either overlook or outright fail to imagine. Somehow his art becomes a vehicle that take us to a universal experience of snowfall, pounding rain, violent thunder, and the warming return of sunlight that has accompanied all of the deepest experiences in our own lives. Not too quick to turn his back on his hometown memories, he saw in them a mountain of ore to comb through to extract his magic.
Time passes and you grow a little.
My turning point with Burchfield happened on a visit to the Ogunquit Museum of American Art on the Maine coast. Unexpectedly I came across the museum's big Burchfield North Wind in March (above). Perhaps being able to look out the museum's window on the Atlantic (that looked ever so much like the beach on Lake Ontario where I'd grown up) had put me in a receptive mood. Or maybe the painting's visual richness just overcame my defenses.
Burchfield's windblown leaves and dark sky summoned up old feelings I'd had as a kid.  I used to love watching the upper limbs of trees bend and shake in storms.  Whatsmore, the watercolor's sheer scale bowled me over. After taking it in at a distance I went right over to the piece to see how it was done. I realized Burchfield had so skillfully disguised the seams where he had enlarged the painting by adding extra paper that he'd fooled my eye.
From then on Burchfield became a painter I took seriously. 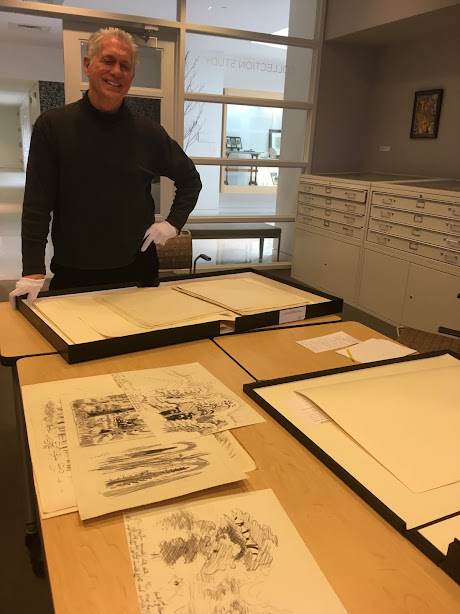 Philip Koch at the Burchfield Penney Art Center selecting
drawings by Charles Burchfield to be displayed alongside
his own works in the museum's 2018 Koch exhibition.
Burchfield and I paint very differently, but we both have a sense of the
restless energy that seems to flow through the world. We both use a quick hand and a freely flowing brush. I think the curators at the Burchfield Penney Art Center in Buffalo, NY saw that connection when in 2015 they invited me to be their Artist in Residence.
The Burchfield Penney acquired two of my oils for their permanent collection.  Split Rail Fence was painted in East Aurora, a town where Burchfield enjoyed making landscapes. It shows that affinity for rapid movement across the surface that I admire in all of Burchfield's work. 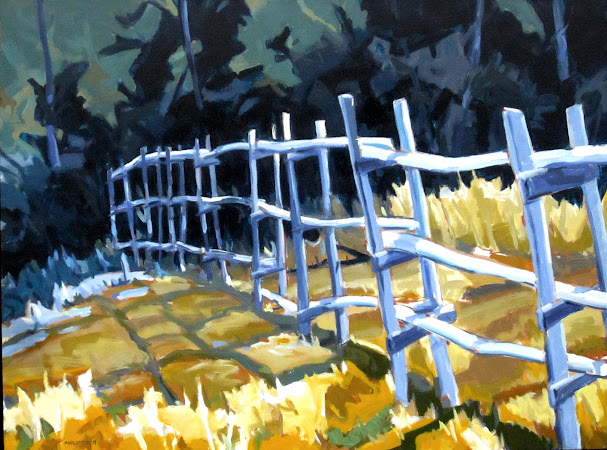