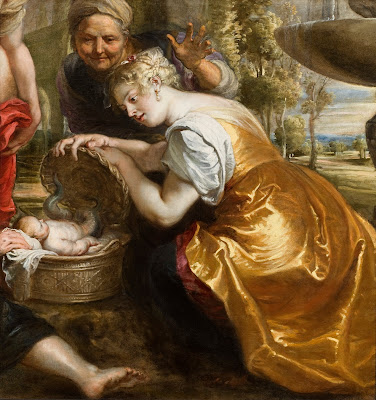 Allen Memorial Art Museum in Oberlin, OH invited alumni to tell how work in its collection had impacted them. Their collection proved to be an amazing teacher. The big lesson I learned is to take exquisite care about how I go about telling a story with my painting.

Yesterday the museum posted my reminiscence on its Facebook page. Here's what I wrote:

The temptation is always to run straight towards your goal. Sometimes that works, but often it leaves you wide of the mark, especially in art.

This lesson hit me over the head when I was just starting out as a painter when I was a studio art major at Oberlin. The Allen Memorial Art Museum has the most remarkable and troubling painting by the 17th-century artist Rubens, 'The Finding of Erichthonius,' from 1632.

I saw it almost daily and I was always a little creeped out by it. Its subject involves the finding of the snake-tailed baby by the three daughters of King Cecrops in a tale from Greek mythology. The story ends badly with the startled daughters driven to madness. I would have preferred to avoid such unpleasantness, but the painting had an odd power to pull me back to look at it yet another time.

The clashing of opposite qualities can be the engine that energizes a painting's story. Right next to the infant creature one of the unknowing daughters kneels down adorned in the most spectacularly painted golden silk dress. Rubens chose a visually spellbinding outfit to lure his viewers in and to heighten the contrast when the baby's gruesome tail is revealed.

Yet this works on several levels- within the fabric's sheen he created curved shapes in the folds of cloth that mimic the pose of the baby's tail. They are opposites but this repetition cements what will be a powerful encounter.


I've taken this lesson from Rubens' painting with me as I've painted over the last decades. Here's an example- 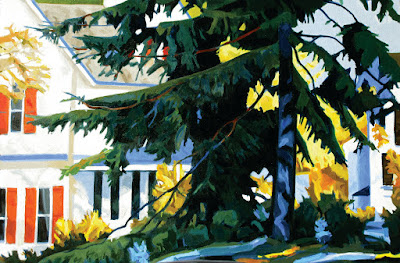 This house just down the road from my studio bathed in strikingly intense sunlight totally delighted my eye. I wanted to make a painting with that as its focus.

I recalled how the Rubens painting had invited us first to look at the woman's elegant billowing dress instead taking us straight to his serpent baby. In my painting I had us first encounter this shadowy evergreen in the foreground. The tree needed to be enlarged and I pushed the highlights on its branches darker and cooler in color than they actually were. Still needing to intensify the sunlight I called for reinforcements, inventing a companion white house at the far right.