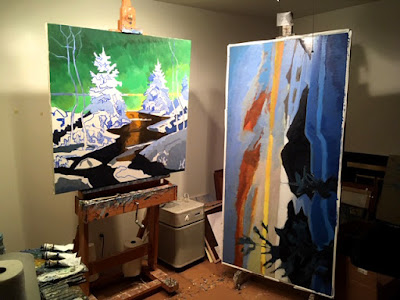 I was turning out the lights for the night last evening in my studio a half hour before it became 2020 and memorialized the moment with a photo. We're supposed to be celebrating new beginnings but on my easels are two paintings that are about looking back.

Sometimes when you can brush the dust off a memory you see its glow is brighter than you had remembered.

On the left is new version of an all time favorite oil that had been damaged in transit and now belongs to a collector (see the last image in this post). I was at the collector's holiday partly last week and seeing the painting for the first time in years. Despite some cracks in its surface it looked even better than I remembered it. I was surprised how much I missed the painting. Woke up the next morning and realized I needed to paint a new version of it.

Other times something that was never quite resolved from the past calls for you to fix it. On the easel on the right is my a canvas From Day to Night. The composition had really pleased me. But I'd always wondered if it couldn't be re-engineered to express a lighter and brighter energy.

I'd been meaning to go back into it and make some big changes. As we approached turning the calendar to another new year I wondered what I'm waiting for and jumped in.

Below is the original composition and one of the charcoal drawings I had made in preparation for painting the big oil. 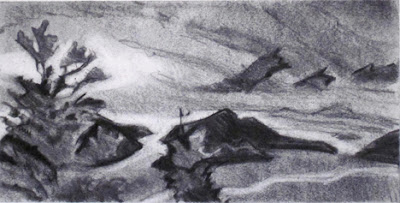