Opening a Door to Yourself 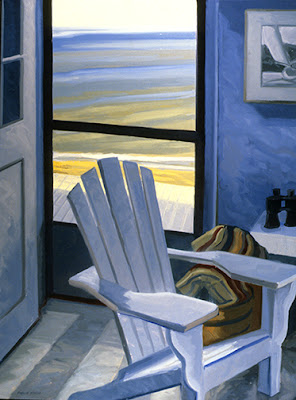 
We find hints of ourselves when we feel moved by the art of others.

This was painted from a smaller oil I made on location in the large painting room of Edward Hopper’s Truro, MA studio.

I’ve been so fortunate over the years to have been given unprecedented access to Hopper’s Truro studio. When one is there you’re inevitably drawn to the windows and this doorway that line the west side of the house. All offer this view of Cape Cod Bay. It’s striking to see.  But for me it also felt familiar as the view reminded me of my boyhood home on the shore of the open waters of Lake Ontario.

It’s funny what can cause you shame when you’re seven or eight. There were two things boys in my neighborhood had to do to be “one of the guys”- ride bikes and play basketball. I was lousy at basketball. And after a hard fall on an early attempt to ride a bicycle try as I might I couldn’t master keeping my balance on a two-wheeler. When basketball or biking were the group's activity, I’d slip away from my friends to our family’s beach on Lake Ontario and play by myself. Much of the time I’d just stare out at the the Lake. On the water you could sail away to other places and maybe other times. It comforted me and suggested my present dilemmas weren’t permanent.

Gazing through this doorway at the Hopper studio you’re transported- I remembered what a friend the waters of Lake Ontario had been to me. I wonder what places it took Hopper’s musings as he looked through it. He did immortalize it in one of his most famous oils, Rooms by the Sea from 1951 (now at Yale’s art museum). This was the first painting I ever paid attention to when I was a teenager and accidentally ran across it in a magazine in my parents’ home. 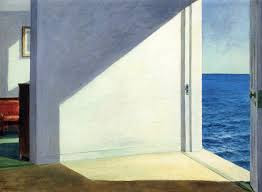 When people are grabbed by a piece of art they don’t stay put. They’re propelled as if by a spring board into fantasy and their old memories are stirred. This is all good- it means the art is doing its work.