The Beauty of Sagging 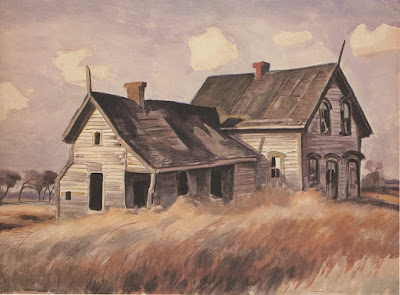 These two paintings, though they depart in color, have a similar theme about aging and the passage of time. It's partly expressed by the contrast of shapes in each of them. 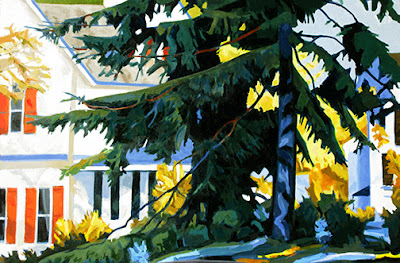 At the top is a poignant watercolor by Charles Burchfield of a long abandoned house. It was new to me when I came across it this evening. What's striking is the serious decay of the section of the house closest to the viewer. As its heavy roof sags further you can sense the movement of its eventual collapse almost as easily as the waving of the windswept grasses.

Burchfield makes that so dramatic by contrasting it with the rear section of the house that still stands upright. The passing years seem eager to pull down this front section. They'll leave the back part for later.

Just yesterday I completed my large canvas Bright Morning. It's a accurate portrait of a house a few hundred yards down the hill from my Baltimore studio. Unlike our unlucky farmhouse, this old house gleams in the morning sun with freshly painted white walls and cheerfully red shutters. The house is over 100 years old but obviously its been lovingly cared for.

What had first caught my eye was how a dark overgrown spruce overlapped the sunlit house. I knew its darkness was essential to emphasize the brilliance of the sun on the white walls. So I pushed the shadows on its branches even deeper.

Only later as I worked on the painting did I sense the significance of how the tree's long branches sagged under their own weight and touch the ground. Their movement suggested just the opposite of all the crisply vertical lines of the house.

It's funny how things will pop into your mind while you're painting. I remembered a contest I used to have with my big sister to see who could hold their arms outstretched the longest. We'd put up a brave fight but after a minute or so you can't help but succumb to gravity's pull and let your arms fall to your sides. (She always won by the way).

I think paintings at their best get us thinking, and just as importantly feeling, about the big issues in our lives. The passage of time, the cycles of life, and the sharp delight we can take in a moment in the here and now.