Painting's Problems Are Just Like Life's Problems: What to Do 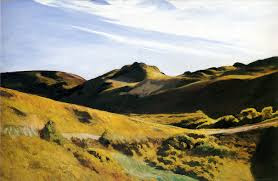 Edward Hopper, The Camel's Hump, oil on canvas, 1930
Munson Williams Proctor Arts Institute, Utica, NY. This
painting was made the first summer Hopper spent on
Cape Cod. He worked from the spot where four years
later he would build the painting studio he would live
in for the next 30 years. It's my favorite Hopper
landscape

Yesterday I was finishing a painting of a tree in a large painting I began last week. The session started out well. In my mind's eye I could see the tree looming magnificently above me in a brilliant morning light. Incredibly rich yet somehow elementally simple.

As I pushed further, layering the brushstrokes to evoke the wonderful volume and intricate surface thousands of glistening leaves make. But it began to go wrong. The commanding personality of the tree melted away into an undistinguished mass of oily dots.

An inner voice told me to put down my brush and get out of the studio before I made things worse. I've learned to listen for that voice.

After dinner I went back into my studio to look at the remains of my tree. Somehow my confusion of earlier in the day lifted and I could see the problem- I had lost the distinctive silhouette that had worked so well in my initial drawing of the tree. Clear-eyed again, I re-drew the outer contours of the tree in a few bold strokes. Going back into the tree, this time with a far more restrained hand, I added a far fewer number of details. Presto...

It's a mystery why sometimes our vision becomes obscured.
It happens in painting and in real life. Just as mysterious is why these clouds of confusion lift again when they do.

There is an art to painting and an art to living. On our good days some inner intuition rises within us and tells us we know what we're doing and to act decisively. And it can tell us when the way forward yet isn't clear yet and the best course is to wait. The "art" part of this is learning to hear that whispering inner voice.
We start by listening for it, a lot.

P.S. The painting above isn't the one I described. I think it's bad luck to post a photo of a painting I'm working on and to write about how the painting is going. I think I heard a whisper to that effect.