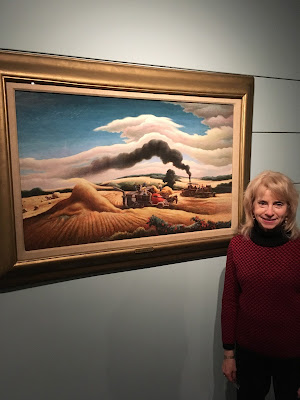 Having visited the Swope Art Museum several times before, I knew that it had a remarkable Permanent Collection. We traveled there earlier this month for the opening reception for their current exhibition of my own paintings. Naturally we wanted to see the work in their Collection as well. Above is my wife Alice standing next to Swope's Thomas Hart Benton painting Threshing Wheat from 1938-39. The tractor's smoke and the clouds in the painting seem to move of course,  but in Benton's lively imagination his piles of wheat and the distant hills pulsate as well.

Art can transport us to a different place or into a different mood. A real gem in Swope's Collection is Grant Wood's Spring in Town, oil, 1941. 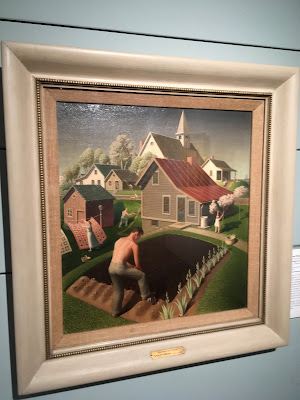 While painted in the threatening early years of WWII, it exudes a quiet optimism as we watch the figure preparing the ground for planting.  The garden's freshly turned earth is magically dark and fertile looking. I want to take my shoes off and feel that dirt between my toes. Apparently this was Grant Wood's last painting. It seems to me to be a great note to go out on...

The exhibition of my own paintings at the Swope focuses on the work I made during my 16 residencies in Edward Hopper's Truro, MA studio. However I have also fallen in love with the work of one of the reclusive Hopper's few friends, the watercolorist Charles Burchfield. Though Hopper and Burchfield painted in dramatically different ways they each had a profound respect for each other's work. 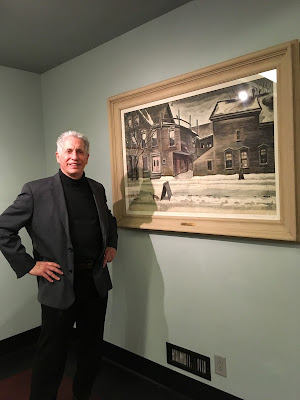 Here I am with the Swope's large Burchfield watercolor Old Houses in Winter. Burchfield loved to tinker with his painting in his studio. He worked on this one from 1929 - 1941.

These last two years I have been the Artist in Residence at the Burchfield Penney Art Center in Buffalo, NY (BPAC). It has the voluminous 25,000 piece Burchfield Archives. Happily I was given access to study hundreds of Burchfield's working drawings that are rarely seen. Here's one that I photographed in the Archives that is huge. Burchfield joined together several sheets of paper to allow him to work at the 4 to 5 foot wide scale often used in his major watercolors. While not identical to the subject of Swope's Burchfield, this drawing shows a very similar cluster of run-down old buildings. 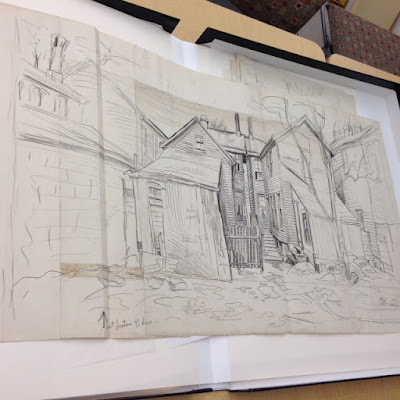 BPAC's drawing reveals Burchfield's art was a complicated affair- it could be wildly fanciful or even darkly moody. But he had a craftsman-like side that often liked to plan out his ideas ahead of time as he was doing here.

Nancy Weekly, the Curator of the Burchfield Collection at BPAC, told me she feels Burchfield's freshness of execution often came from the way he would "rehearse" the strokes he wanted his brush to make on separate sheets of paper. I wonder if the drawing I photographed above wasn't part of the preparation for the Swope's Old Houses in Winter.

In a few days I'll show some more favorites from the Swope's Collection in a new blog post.

Swope's show of my own work continues through March 25, 2017. Hope many of you can get to visit the Swope and see it and their Collection in person. 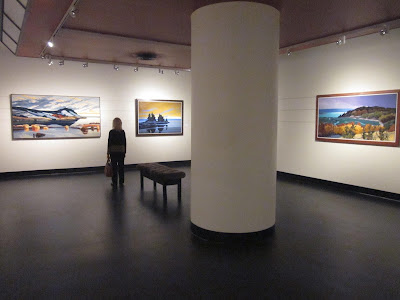