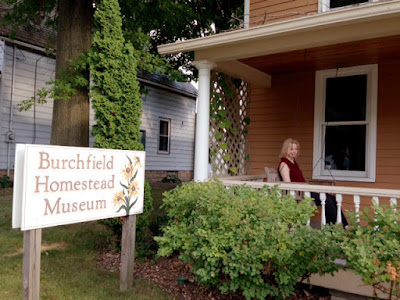 As part of my being the Artist-In-Residence for this year at the Burchfield Penney Art Center, I traveled with my wife Alice to Salem, Ohio, the childhood home of the artist Charles Burchfield. The Burchfield Homestead Society restored the home where the career of the visionary artist began. It is very well worth a visit for anyone who admires Burchfield's work. Above is Alice cooling her heels on Burchfield's front porch swing.

It's a modest but art historically important home. Burchfield made many of his powerful early paintings peering out through its windows at the neighborhood. Below is a vine charcoal drawing I made standing at the rear of his yard looking back at the house. At the far left of my drawing is a long one-story house that Burchfield would paint repeatedly.

Here is probably his most famous painting of that building, The Night Wind, (note the vertical chimney in its center). 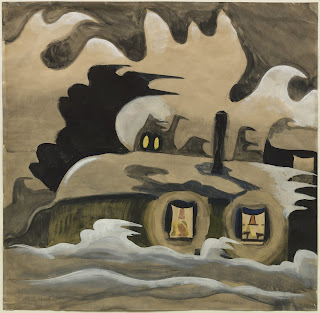 Here below is the same chimney in a pastel and charcoal drawing I made looking out a window from one of the second floor bedrooms of the house. 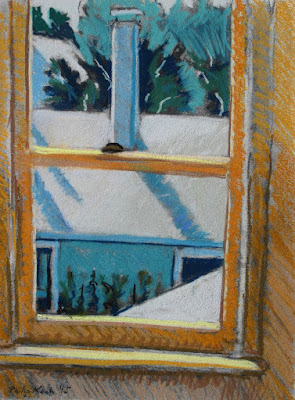 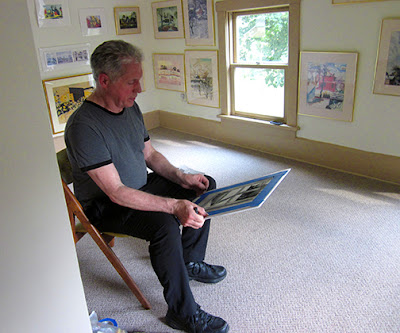 Here's the view of the neighboring one-story house from the same window. 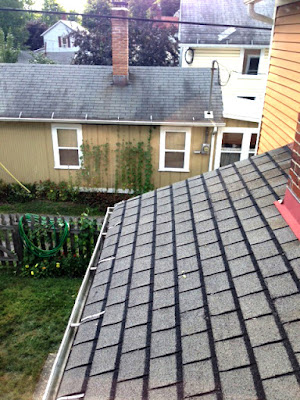 I did a second drawing of the same building from the backyard. As it was hot I sought out the partial shade provided by the arbor that's part of the extensive restoration of Burchfield's beloved gardens.  Here's my drawing in progress earlier this week. 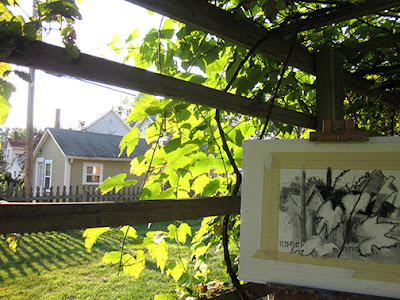 The drawing's composition is unusual for me and shows the influence of Burchfield's love of two dimensional patterns. My Salem trip revealed more than just peaceful bucolic yards. In many ways Burchfield's paintings and writings prefigure the urgent concerns of our present day environmental movement. He was keenly aware that humankind's interaction with the natural world wasn't always benign.

Tullis Johnson, one of Burchfield Penney's Curators is working on an upcoming exhibition Blistering Vision: Charles E. Burchfield's Sublime American Landscapes that looks at another side of Burchfield's imagination. Johnson urged me to take a side trip over to the abandoned coke ovens in neighboring Leetonia, OH, a somewhat otherworldly remnant of the 19th century heavy steel industry.

I confess I had to consult Wikipedia to learn that coke was produced by heating coal in a controlled process.  Large beehive-shaped brick ovens were built in long rows and covered with earth to hold in the heat they produced. The ovens burned day and night and spewed forth clouds of toxic gasses. The Leetonia operation was still going in Burchfield's day. Its fiery drama made a deep impression on him. Below is one of his paintings from the site. 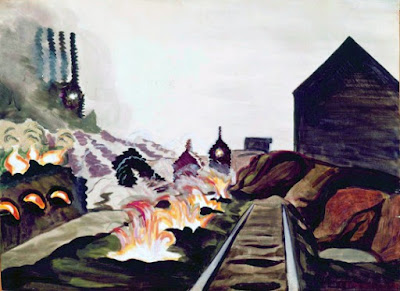 Here I am working from some of the same mouth-like openings of the buried coke ovens. Honestly I found them a little creepy. 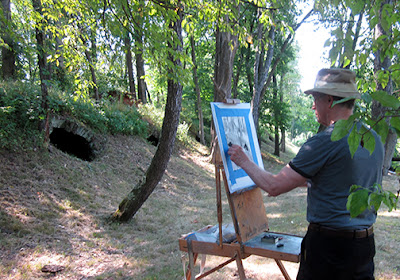 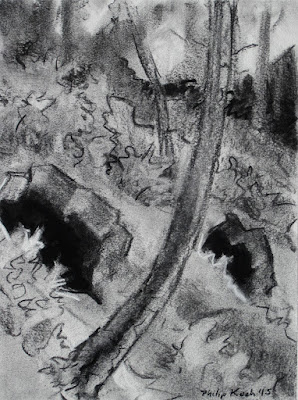 Lastly here's a drawing I made just off the wonderfully named Egypt Road, on the outskirts of Salem, one of Burchfield's favorite sources for his paintings. 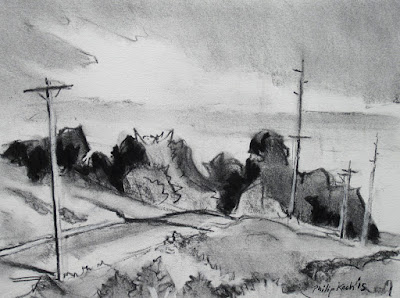 To me it seemed ever so much like the rolling country roads I traveled as a boy in my hometown of Webster, NY (just outside Rochester).

Burchfield wasn't an artist who needed to travel to the most dramatic mountain ranges or most rugged coastlines. Around Salem, Ohio he found material that inspired his inimitable and fantasy-tinged vision. His paintings show how this land felt as much as how it looked. He'd discovered a somewhat enchanted place, a place that he feared was too little noticed and too little appreciated.

I'll be giving a talk at the Burchfield Penney Art Center on Sunday, October 18, 2 -3 p.m. titled Three Watercolor Masters: What Homer, Hopper and Burchfield Want to Say to Us. Burchfield sensed there is a kind of magic hidden in our everday surroundings. His paintings gently urge us to drop our preoccupations and drink in some of that energy and mystery.  He would tell us it's right under our nose.