Edward Hopper v.s. Thomas Kinkade- Who's The Painter of Light ? 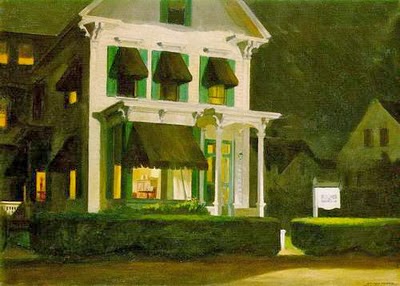 An oil painting by Thomas Kinkade


One of the best reasons to look at art is it teaches us how to enjoy our eyes. Paintings are always lessons in seeing. Really good paintings simply help you have a lot more fun.

Thomas Kinkade, probably one of the best known American artists and certainly one of the best marketed, passed away in the spring of 2012. Kinkade called himself "The Painter of Light", a slogan that had a certain ring to it. Kinkade's ubiquitous images are likely some of the first paintings most Americans were likely to have stumbled across. But if one keeps looking, there are probably other artists who have a great deal more to say to us about painting light with real authenticity.

Longtime readers of this blog won't be surprised if I offer Edward Hopper as an alternative. Comparing the two landscapes above is revealing of some of the deeper essentials of painting.

If painting is primarily about seeing who can report on the most facts, I think the Kinkade wins the race to pile up the most details.
To me though art delivers meaning by telling us how things feel rather than just what we are looking at. Hopper's work to me isn't as sweetly reassuring, but instead offers a little surprise in what he selects to show us. And select he does, leaving out most of the essential facts so they won't distract us.

Color wise, Kinkade has intense versions of yellow, orange, red, blue green and a blue violet. It's a bit like an insecure cook adding a dash of every spice in the kitchen hoping to ramp up tonight's dinner. The Hopper in comparison narrows down its hues to mostly greys, yellows and greens. The painter has a confidence that he can do a lot employing fewer but better chosen tools.

For one example, look at the role Hopper assigns to the color white. The sides of the house are a warm yellow-white that he contrasts against the strikingly cool white of the illuminated sign. Playing with subtle gradations of warm and cool within a color can provide a quiet and dignified expressiveness. It makes you feel you're seeing details that aren't even there.

Lastly, Hopper's Rooms for Tourists, embraces the night to make what light he does give us have a dramatic story to tell. A few key forms are pushed forward into our attention- the cool illuminated sign, the inviting parlor we glimpse through the big window. But everything else is pushed back towards the shadows, making us wonder a bit about these other less described spaces. There's a little touch of mystery to Hopper's night. Hopper I think more than most painters grasped the expressive power of light and shadow. He understood that it is the interplay of light and dark that lend each other their true meaning.

Hopper shared with us both what he found beautiful (very often the effects of light) with what he found unexpected and sometimes even a little unsettling in the world. I think he was saying to us that we are meant to pay attention, that living fully doesn't mean closing one's eyes to what isn't anticipated or to what doesn't make us immediately comfortable. Always in a Hopper there is a magical richness of color or a drama to the light. But also we find composition designed to shake us up a little to make sure we open our eyes good and wide.