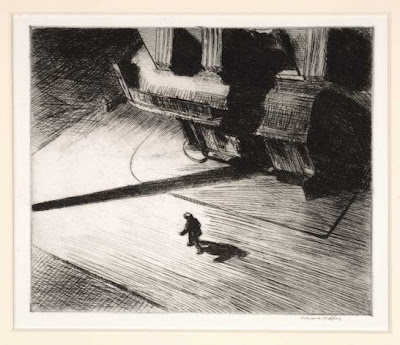 Here are three images for you. First, Edward Hopper (American, 1882-1967) Night Shadows, 1921.I love this etching for its moodiness and its unusual point of view. Hopper lived until he was almost 30 in a second story bedroom in his family's house in Nyack, NY. It had three windows that faced Broadway, one of Nyack's main streets. Every night when Hopper looked out one of these windows he saw figures just like this one casting shadows as they walked alone down the sidewalk. Hopper had the sense to feel the poetry in his immediate surroundings. And he had the talent and determination to find a way to compose his etching to make you feel so much of what he felt.There are dozens of great design ideas in this print. Let's look for a moment at just the long cast shadow of the lightpole (I'm assuming that's what it is) that first catches everyone's eye when they look at this piece. It moves in from the left and ascends diagonally across the sidewalk, moving deliberately in a direction opposing our walker. It tapers ever so gradually wider and begins to lighten up a bit. Then BANG, it hits the storefront and abruptly swells up into an inky black and wildly abstract shape that cranks its way across the store's awning and second story. Our lone figure has some very interesting neighbors he's passing by on his walk. 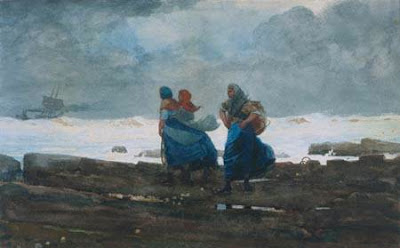 Winslow Homer (American, 1836-1910) Fishwives
Homer is great and I think I'll never every get over him. Here's one of the watercolors he made while living for several years among the fishing people in a small English seacoast town. These were hardworking people who took enormous risks to go out onto uncertain waters to make a living. To Homer, they seemed heroic, both the men and the women.

In fact often Homer seems to make the females the real center of the community. Here two women and a child cast a perhaps wary eye out into the rough seas to see how their fishermen are doing. We don't see their faces yet there's an undeniable purpose and common bond between these women. Homer gives them expressive power in a whole number of ways. But maybe best of all is the wonderfully inventive little "keyhole" of light ocean we see squeezed between their two hips. The women's bodies and that piece of water dance perfectly together to form a three part chord.

Homer and Hopper had looked long and hard at the work of the painters that had gone before them. They learned from what they saw, internalizing an awesomely vivid language of color and shapes that we simply call "painting." As one starts to look at their work one can feel it is from another time, but that is is still quietly glowing with a subtle energy. The longer one looks, the more one sees. And the more these artists from the past seem to be alive and ready to talk with us with something important to say.

OK, are you ready to shift your gears... 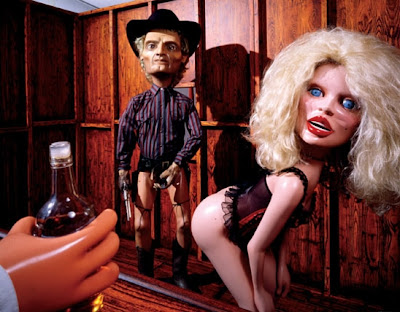 Paul McCarthy is an American sculptor, installation and video artist born in Los Angeles in 1945. This is a photo from a mixed media installation from 1966. His work has received considerable attention in recent years.

The McCarthy piece seems much more tongue-in-cheek, more meant to amuse and cast one back into a reverie of old western movies or TV shows. It also seems to come from a different planet than the Homer and Hopper. McCarthy's sculpture looks a little like the kind of drawings I was making when I was twelve or thirteen. And maybe that's the point. It's bawdy and funny, but it isn't an image I'm particularly eager to linger on. I don't have to. The art world is a big tent, so big that no one can ever see all the painting, sculpture or video that has been produced.

When I was a young artist I felt the need to look at everything in the art world. Certainly if something was in Art News magazine or in a major art museum it must have something to teach me I figured. But time passed and I found myself developing favorites and wanting to specialize my enthusiasms. Frank Stella and Mark Rothko, abstract painters who were fashionable in the late 1960's were early heroes. I tried to make paintings like theirs. And not too much later than that I fell under the spell of Edward Hopper and the romance of 19th century landscape. So I changed again, but this time it stuck.

I see a great deal of art that tries hard to do something innovative, generally it's described as avant garde art. Much of it doesn't work really well, some of it is downright oppressively awful. But every now and then I see something that surprises me in a way I like.

I also see lots of landscape paintings because I seek them out (can't help myself). If I were to ask myself whether I've seen more unsuccessful landscape paintings or more avant garde pieces of art that were failures, I'm not sure what the answer would be.

Obviously it is hard to do work that is really outstanding. Maybe the small mountains of art that didn't quite make it are the price we have to pay for the occasional over the top masterpiece.

If I could offer any advice to artists or to lovers of art about how to negotiate one's way among all the contending schools of thought in the arts it would be:

-realize that people aren't all exactly alike and are not going to all respond to the same things.

-don't feel responsible to have an opinion about every piece of art that's ever been made.

-understand that when you hate a piece of art by someone it's OK. You are also clearing a place in your heart for   you to fall in love with something else.

-if you're an artist you can't bark up every tree. Pick tree that feels best for you and bark yourself   hoarse.

Reminder:
My art website philipkoch.com is going to be moving to a new web address near the end of June- philipkoch.org
Please make a note of it.