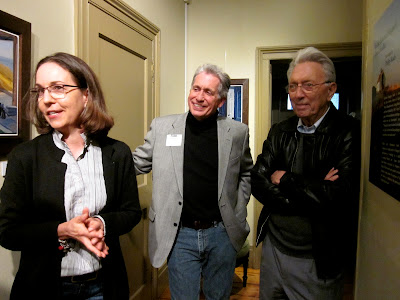 The show of an intimate group of interior views of Edward Hopper's Cape Cod studio opened last Saturday night in Nyack, NY at Hopper's birthplace and boyhood home, the Edward Hopper House Art Center. The exhibition runs through July 1, 2012.
Here I am (in the middle) with Victoria Hertz, President of Edward Hopper House Art Center's Board of Trustees and Anton Schiffenhaus during the reception. We had a great turn out to see my artwork and that of Max Greis in an accompanying gallery. Afterwards I gave a slide talk to a sell out crowd on why I think Hopper's art claims so much territory in American imagination (though I should add his appeal certainly doesn't stop at our border). 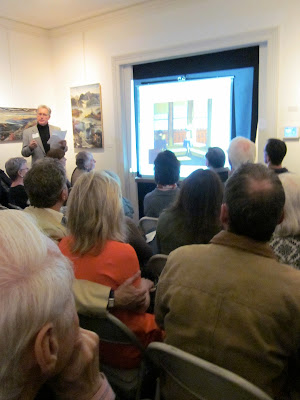 I began the talk by showing who Hopper wasn't using an image of one of Claude Monet's famous oils of the Rouen Cathedral where he dissolves the limestone facade into the atmosphere. Monet was once described by Picasso as "Just an eye, but WHAT an eye!" He was talking in part about Monet's life long fascination with light and the effects of atmosphere. 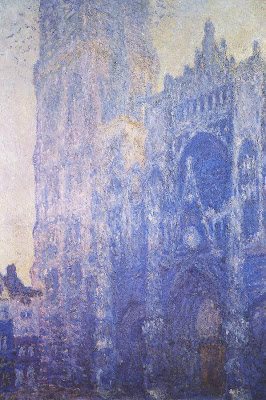 Hopper in his way was just as close an observer of light, but he imagined it so differently. Very typically Hopper jacks up his highlights into lighter tones and pulls his shadows down into deeper darks than Monet. For Hopper the shapes of shadows was paramount and he didn't shy away from outlining them with sharp, clear edges. Corn Hill, the oil below by Hopper is a good example. 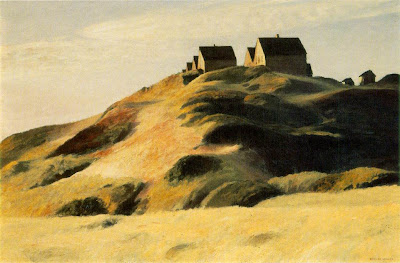 I think a real hallmark of Hopper is found in his affection for high contrast of shape and tone. Many of his paintings celebrate almost harsh transitions like the way the houses seem a touch out of their element as they perch atop Corn Hill.
For myself, I'm a big fan of Hopper's love of the expressiveness that can be found in the rhythms of flat shapes. In Corn Hill above, the repeated curves of the hillocks remind me almost of living things. They move so differently than the stiff and erect rows of little houses. Hopper's magic is he gets both of these worlds to visually coexist and even enter into a conversation with each other. A good painting like this one nudges you to slip over into your own private reveries.
Once in Provincetown, Massachusetts (just up the road from Corn Hill on Cape Cod) we went on one of those whale watching cruises. We did see whales and they were awesome, but as we returned to the harbor as the sun was lowering in the sky, an enormous group of dolphins surrounded our boat . Jumping out of the water with their characteristic arcing movements, their wet backs were highlighted by the sun in a totally amazing aqua ballet. I'll always remember that moment. And I can't look at Corn Hill without seeing a fleet of dolphins swimming their way across the hillside.
Here's some of the paintings in my show. 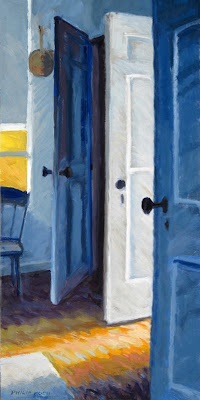 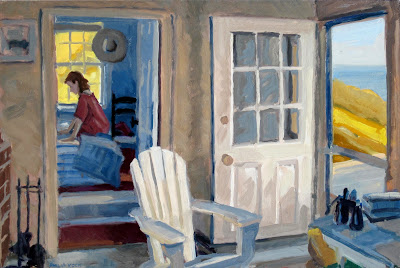 Morning Truro Studio,  oil on panel, 14 x 21", 2012. This painting was begun some years ago during one of my earlier residencies in the Hopper studio and re-painted just this year. 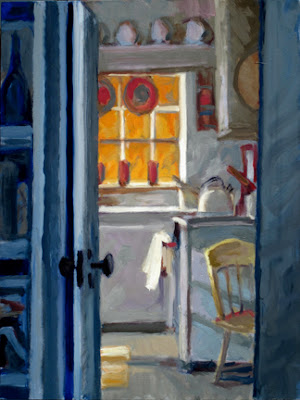 Edward Hopper's Truro Studio Kitchen, oil on panel, 16 x 12", 2012.
I gave the lecture in what used to be the living room of the Hopper House in Nyack. Right above our heads I told the audience was a major key to understanding Hopper's art. Over us was his bedroom, the room both he and his mother were born in, and the room he slept in the first decades of his life. This is the view out his bedroom window- an elevated point of view, telephone poles, triangular shaped roof tops, and in the distance, the waters of the Hudson River. These elements circled back and around in Hopper's imagination as he painted all through his life. 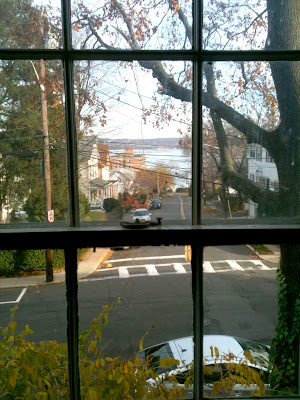 Below is a view of Gloucester harbor in Massachusetts, a Hopper painting I love, and one that shows the link to that childhood bedroom window view. 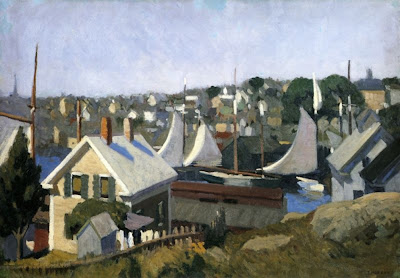 Here's another Hopper showing his love of telephone poles and the triangular forms of rooftops. It's Route 6, Eastham,  that's in the Collection of the Swope Art Museum in Terra Haute, Indiana. Years ago when I had the second solo exhibition of my paintings at the Swope, their Director let me hold this painting, one of my all time favorite Hoppers, in my arms (I had to promise not to drool on it). 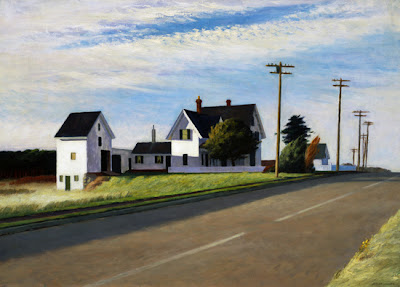 Here's a photo of my wife Alice standing at the head of Hopper's Cape Cod driveway with the studio in the distance taken in September 2010. 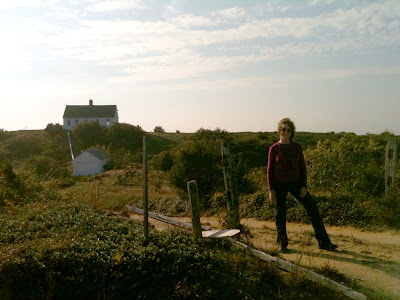 This is an oil I painted in 1983 when I was staying at the Hopper studio for the first time. 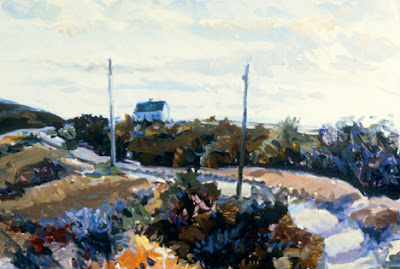 Below is a vine charcoal I did sitting on the end of the bed in Hopper's studio, with his bureau and lamp in front of two double hung windows looking out to Cape Cod Bay. I'm currently using this drawing as a basis for a new oil painting. 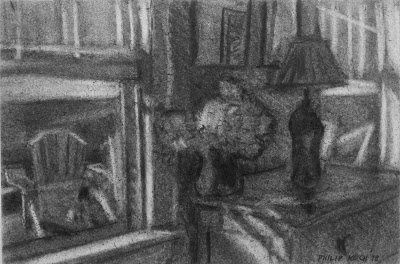 This is the Hopper studio seen from well out into Cape Cod Bay (it's the tiny white rectangle right in the middle of the shoreline). In Hopper's day, probably none of the much larger summer homes dotting the dunes at the right would have been there. Hopper was a man who wanted to be left alone to enjoy his solitude and enjoy nature. Building the studio he designed in 1934 on this sand dune in S. Truro, he found just the right spot. 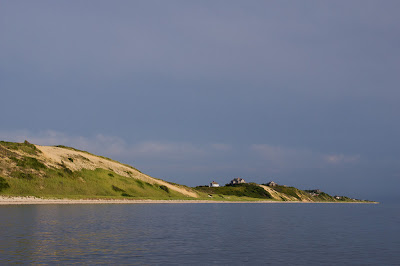 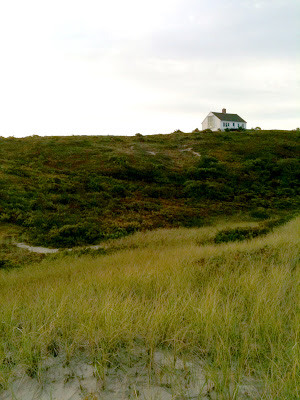