How Charlton Heston Made Me an Artitst 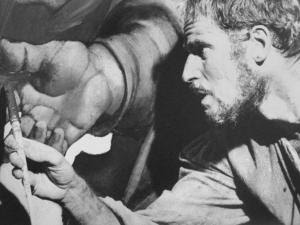 Charlton Heston as Michelangelo painting the Cistine Chapel ceiling.
Sometimes at an opening reception people come up to me and innocently ask me how I became an artist. I don't ususally tell them about Charlton Heston. Sometimes the oddest things provide just the right nudge to get you moving on a new path. So it was with me and Charlton.
I came from a family of academics and was groomed to be a college professor. In the fall of 1966 I entered Oberlin College in Ohio certain I was headed for a career as a sociologist or an historian. No doubt about it. To prove my seriousness I had signed up not only for Sociology 101 my very first semester but also dutifully enrolled in an Art History survey class to get the requirement for graduation of a course "in art or music" out of the way. I was going to clear the decks so I could get serious about my budding sociology or history career. As luck would have it, my Sociology class was taught by a shy and awkward instructor who sheepishly confessed the first day that this was the first class he had ever taught and to please bear with him. Sadly, he was awful as a teacher. Following his meandering lectures wasn't for the faint hearted.
Much to my dismay, I didn't like any of my classes that Fall except for the art history class. While I'd always drawn cartoons for my friends, I'd not taken art in high school and knew zero about art history. But it was a little like going to the movies as they'd show you a couple dozen slides of paintings every class as they lectured. It was fun to pick out my favorites and which I felt didn't measure up.
In mid October I was camped out one night in the Library writing my first twenty page Sociology term paper and it was going badly. The spirited enthusiasm with which I'd started the class had drained away and I had no idea what to say about the assigned topic. I think I'd managed to write page eight when I couldn't take it anymore and threw down my pen. I had to get out of there. Spontaneously I decided to take myself to the movies. For a chronically disciplined academic over achiever like myself to do this on a "school night" bordered on treason.
Oberlin, Ohio was a small town with a one screen theater. As it turned out, the feature playing was a really dreadful Hollywood adaptation of Irving Stone's leaden novel about Michelangelo, The Agony and the Ecstasy starring that icon of all things masculine, Charlton Heston. It was pretty bad. Mostly Charlton would grip his brushes extra hard as he painted the Sistine Chapel ceiling to make his biceps stand out impressively. And he sweated a lot.
One particularly cheesy scene stood out. Frustrated with the progress of his work, Charlton climbs a mountain and, reaching the summit,  has a revelation as the clouds overhead transform themselves to reveal to Michelangelo the composition of The Creation of Adam section of the Sistine Ceiling. Renewed, Charlton scrambles back down the mountain and finishes off the ceiling to universal delight.

Sitting alone in the theater watching all this I felt at once both embarrassed at the obviousness of the plot and yet fascinated at the idea of an artist working with his imagination to come up with the imagery to create powerful paintings. To its credit, the film did show lots of close ups of Michelangelo's remarkable figures. I was eighteen and hungry to put some drama into my own life. And nobody from the Renaissance did drama better than Michelangelo. I left the theater and walked back to my dorm in the rain with the germ of a new idea in my head. I could be an artist. I didn't tell anyone about my experience that night as I still needed to mull over my feelings. But within a few weeks I'd made my decision, and changed all the classes I was signing up for in the next semester to include both of the College's introductory studio art classes.. I was setting out on a new voyage.

That was forty five years ago and I've painted every day since then. That Charlton Heston played a part in making me an artist isn't something I tell most people.  So often when I'm making a painting I get the new idea I need to pull its composition together at an unlikely time or from an unrelated source that catches my eye. That the icon of the American firearms industry gave me that little push over the edge into the world of art has a delicious ironic touch to it. What the heck, art and artists are supposed to revel in the unexpected visions and the overlooked opportunities. So I'll take all the help I can get, even from a  Hollywood B movie.

You'll excuse me but I've got to get back to flexing my biceps and sweating profusely in the studio...
art history my history Oberlin