Was looking at the always interesting Painting Perceptions website run by Larry Groff. It has a new posting on Fairfield Porter I enjoyed this morning. It got me thinking about the difference between two of the main ways of seeing in painting- one can either move one's eye across the surface or plunge into the painting's depth. In the first mode, things tend towards flatness and emphasize the shape of their silhouettes. In the second, it's much more likely to find a real sense of volumes.  Let's use Porter as an example and contrast him against Edward Hopper. These two realist American painters are both very good yet they exemplify different sides of the painting coin.
Above is a Porter oil of a house and garden. Porter's choice of his point of view is revealing. Instead of a clear, unobstructed view that would let you see the house, he interrupts the line of sight with at least four additional layers of trees and shrubs. Its focus is on the network of branches and leaves that run across the painting's surface more than it's about creating a real depth of space and convincing volumes.
This can be exactly what we experience when we walk through any crowded space- there can be so much information that our mind's eye has to summarize it as just a crowd or multitude. I remember years ago when I lived in New York City and attended the Art Students League. Each morning I'd take the subway to class at rush hour and would have to squeeze (holding my paint box and often a wet canvas) into a herd of others heading off to their jobs. You'd be riding in a car with maybe 100 other people, most standing up and clinging to overhead handles or poles trying not to fall over as the train bumped and lurched its way forward. What you would see would be the moving, swaying mass of people rather than individuals.
Porter's painting, while hardly summoning up images of a New York subway, suggests this way of seeing reality.
Below is a very different world- it's an oil by Edward Hopper, Seven A,M,. As the title indicates, it's way before rush hour and typical for Hopper, he's picked a much more sparse and pared down world to paint. 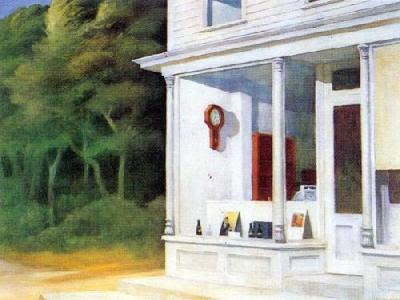 Hopper's world is one of clear, sharp definition. He's showing us defined spaces (the storefront, it's interior, and the dark forest background). You could walk into his space and almost measure the picture's depth in feet and inches. Where in Porter's painting one is always aware the forms are made of flat areas of oil paint, here Hopper populates his world with carefully modeled objects you could pick up and hold in your hands. They're all volumes, they have real weight.
Back to Poter's more two dimensional world... 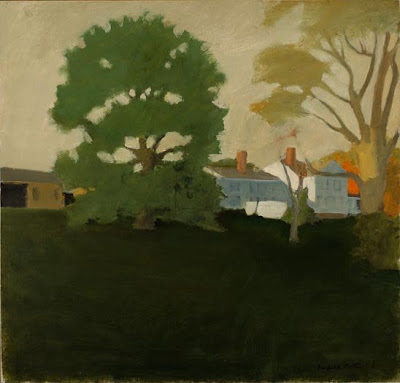 And to Hopper's imagination so full of clear volumes and deeper spaces.

There's the old retort by painters "I paint what I see." A bigger question arises once one realizes just how much there is to see in reality (both external reality and the internal reality of our thougths and emotions). Art happens only as we choose which aspect of what we see we're going to emphasize.

In real life when you meet a new person you're often struck by some aspect of their personality that you sense is unique to them. So it is with paintings- if they are to be good they're about selectivity, about the artist picking wisely from the myriad facets of reality to weave a convincing, personality-rich world for the viewer.